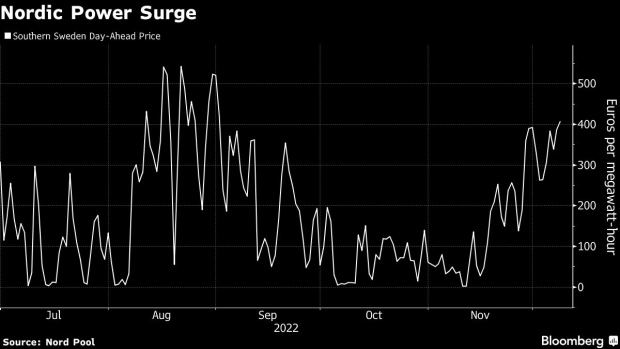 (Bloomberg) -- Sweden’s power crisis is getting worse, with an outage at its biggest nuclear reactor exposing the nation to the real risk of disconnections, Swedish Prime Minister Ulf Kristersson said.

Uniper SE will shut its Oskarshamn-3 unit on the nation’s southeast coast for a nine-day maintenance outage later on Friday, exacerbating a power shortage. Sweden will next week have to rely on imports from Norway, Germany and Poland to ensure there’s enough electricity to go around, the grid operator said.

“The situation is relatively acute, we don’t want to create panic but it is a serious problem and there are significant risks,” Kristersson told journalists Friday. “Southern Sweden is the area in all of Europe with the least production capacity compared with demand.”

The halt will test the country’s grid like never before and comes in the middle of a cold snap that has sent temperatures in Stockholm to as low as 8 degrees Celsius (14 Fahrenheit) below the seasonal average. Power prices in the area are trading at their highest since the height of the crisis in the summer. They will remain “very high” through at least next week, Lotta Medelius-Bredhe, chief executive officer of Svenska Kraftnat said.

“It’s not great to do this now since the margins are very small in southern Sweden this winter,” Uniper said in a statement on its website. “At the same time, it’s necessary to do these repairs now to ensure the best possible operation.”

The Swedish power crisis has been worsened by a prolonged outage at Vattenfall AB’s Ringhals-4 reactor, which is out of service until Feb. 23. Atomic energy is vital to keep the lights on in the Nordic region’s biggest economy.

The halt is yet another financial blow for the debt-ridden Uniper, which has been bailed out by the German government because of the energy crisis. OKG, the operating company, has already sold the nine days of electricity in advance, and now “needs to buy the same output on the spot market at a completely different price,” it said in a statement.