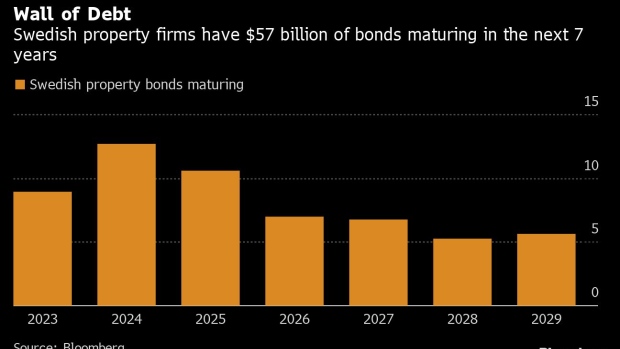 Evening sunlight illuminates residential apartment buildings on the Sickla Kanal in the Hammarby Sjostad district in Stockholm, Sweden, on Tuesday, June 1, 2021. The "red hot" housing market in Sweden is likely to slow down after the summer, according to the chief economist at the country's biggest bank, Svenska Handelsbanken AB. Photographer: Mikael Sjoberg/Bloomberg , Bloomberg

(Bloomberg) -- The pain in the Swedish property sector is about to spread further, as more companies face the risk of downgrades spurred by their deteriorating debt profiles, according to credit-rating company Moody’s Investors Service.

Rising inflation and higher funding costs are hurting real-estate companies, whose debt-driven growth strategies are fast becoming unprofitable, or unfeasible, when refinancing options dry up. Moody’s, which has already cut the rating of Castellum AB and lowered the rating outlooks on the debt of Fastighets AB Balder and Fabege AB, said it expects more “negative rating actions” to come as companies’ ability to service their debt is eroded.

The firms most exposed to negative actions would be those with “low-yielding assets, significant refinancing needs and a low degree of hedges,” Moody’s Senior Credit Officer Maria Gillholm said in an interview, adding that such assets are found within Stockholm’s central business district and residential properties.

Nordic property firms “are very vulnerable to higher interest rates” and need to refinance almost 300 billion kronor ($29 billion) of bonds in the next two years, according to a Moody’s report published on Tuesday. But for some, the credit market won’t be an option as financing costs are likely to be too high. Banks are expected to absorb a share of that lending -- but not all -- and they will probably focus on those with the strongest finances, the rating company said.

“The banking sector clearly has the technical capacity to take basically everyone on board if you look at the next couple of years,” Senior Credit Officer Louise Welin said. “But they will be selective and only lend to companies with good creditworthiness.”

Michael Johansson, a real estate analyst with Arctic Securities, said the refinancing next year should be “relatively smooth” for larger firms, but that the problems will be more visible in the following two years. Some smaller companies will see their fate determined in negotiations with bondholders, if they don’t take action to secure financing, he he said via a text message.

The situation is more acute in Sweden, Moody’s said, because the sector is much larger there than it is in Finland or Norway. Many of the landlords will also face difficulties in lifting rents in tandem with inflation as tenants may be struggling, Moody’s said in the report.

And while most Nordic real-estate firms have enough liquidity to cover bond maturities for the coming year-and-a-half, those resources are set to dwindle as companies await re-entry to the bond market, it said.

The rating firm doesn’t expect the Riksbank, which during the pandemic bought 7.1 billion of real estate bonds, to come to the sector’s aid again unless its refinancing problems threaten broader financial stability.

On a conference hosted by Moody’s on Tuesday the Swedish central bank’s Deputy Governor Martin Floden said that the sector is unlikely to need support from the Riksbank, and that propping up companies that are unable to deal with current borrowing costs would make little sense.

“Sure, we have raised rates rapidly in a short period of time but the policy rate is still at 2.5%,” Floden said. “That is a low level and companies that can’t handle a rate at 2.5% maybe shouldn’t exist.”

The Riksbank and Sweden’s Financial Supervisory Authority have repeatedly warned of the risks stemming from commercial property debt. Anders Kvist, a senior adviser to the director of the FSA, recently said that falling real-estate values could trigger a “domino effect,” as demands for more collateral could force distressed selling.

Moody’s said that valuations could come down by about 10% on average, varying by asset type, quality and location. It sees residential, shopping centers and logistics properties declining before office real estate. Increased revenues from indexed rents and finished projects could offset some of the negative effects, Gillholm said.

--With assistance from Abhinav Ramnarayan and Niclas Rolander.

(Updates with chart and comments from sixth paragraph.)