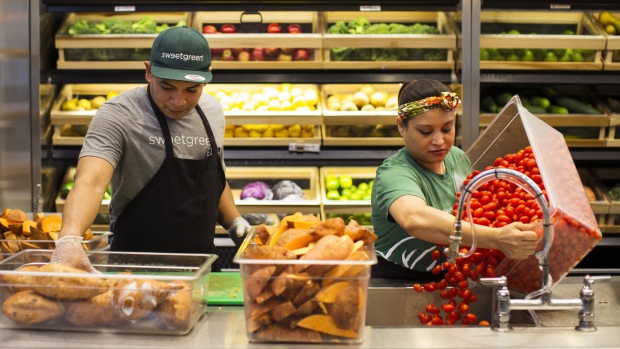 Workers prepare vegetables inside a Sweetgreen Inc. restaurant in Boston, Massachusetts, U.S., on Tuesday, Oct. 24, 2017. The fast casual dining chain Sweetgreen was founded in 2007 by three classmates from Georgetown University, and has expanded from its Washington roots to more than 80 locations nationally. , Bloomberg

(Bloomberg) -- Salad chain Sweetgreen Inc. declined after trimming its revenue forecast for the year, making it the latest consumer company to warn about weakening demand.

The Los Angeles-based company, which went public late last year, now sees revenue in a range of $480 million to $500 million in its current fiscal year -- a reduction of $35 million from the previous outlook.

The shares fell 8.2% in New York trading on Wednesday, paring some of an earlier decline that reached as much as 14%. The stock has declined more than 40% since its market debut in November.

Sweetgreen is especially popular among white-collar office workers in economic hubs like New York City and Silicon Valley. But in both the Bay Area and the Northeast, workers have been returning to the office at a slower clip than in other parts of the country. That’s diminished demand for the company’s pricey salads at the same time that other more price-sensitive consumers are being squeezed by higher inflation.

“We began to see softness in revenue around Memorial Day and are therefore lowering our 2022 guidance,” Chief Financial Officer Mitch Reback said in the company’s earnings statement. “We will continue to manage corporate overhead and efficiently run our restaurants as we work towards profitability.”

Wall Street analysts responded to the earnings report by cutting their price targets on Sweetgreen’s stock. At the same time, several of them saw bright spots including better margins.

In a note to clients, Goldman Sachs analyst Jared Garber said that Sweetgreen still has attractive growth prospects as it seeks to grow to 1,000 locations by 2030 from about 160 today. Results could rebound as more workers return to the office after Labor Day, he added.

Decades-high inflation and the uneven return to office has caused companies across industries to scale back expectations. The pressure is especially high for restaurants. Last week, Shake Shack Inc. cut its full-year guidance for domestic co-operated restaurants, blaming a lack of urban office workers. Other eateries, such as Chipotle Mexican Grill Inc. and McDonald’s Corp., have reported strong sales but noted that diners are trading down to more affordable options.

Sweetgreen said it took steps this week to cut costs, including eliminating 5% of jobs at its support center and moving the remaining operations to a smaller adjacent office. The company aims to earn rent money by subletting the vacated space.