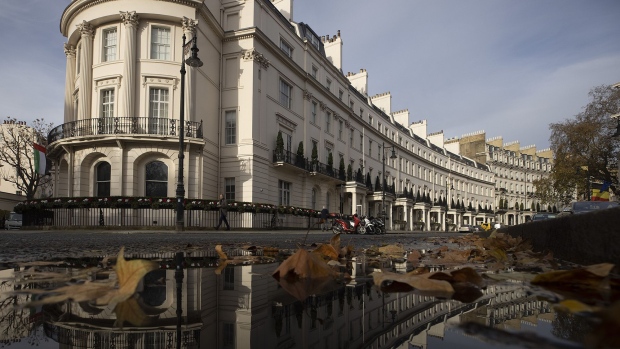 A terrace of residential houses in the Belgravia district of London. , Photographer: Simon Dawson/Bloomberg

(Bloomberg) -- Swiss billionaire Ernesto Bertarelli is acquiring a home in London’s exclusive Belgravia district for about £92 million ($113 million), the latest sign of a resurgence in the city’s luxury property market.

The house was built in the 19th century and has more than 80 rooms, according to people with knowledge of the matter, who asked not to be identified as the transaction is private.

Extensively refurbished in recent years, the property includes a cinema, gym, and a 20-meter swimming pool. A spokesman for Bertarelli declined to comment.

The purchase highlights a turnaround in demand for London’s best homes since the pandemic. Those properties gained the most in more than seven years in May as buyers competed to acquire houses with outdoor space.

The deal is the latest London property deal for Bertarelli, 56, who orchestrated the sale of his family’s fertility drug maker Serono for $8.6 billion in 2006. He is an investor in Crosstree Real Estate Partners, which owns The Standard Hotel opposite St Pancras railway station, and other buildings across London.

Today, the family fortune is valued at about $18.4 billion, according to the Bloomberg Billionaires Index, after they expanded into hedge funds, private equity and real estate.