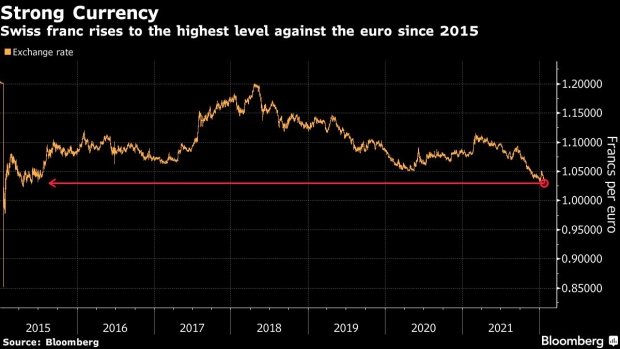 The Swiss franc’s latest appreciation has pushed it to a six-year high against the euro, but the consensus among businesses is that rapid move isn’t having an immediate negative impact on the economy.

“High prices are an indicator of a successful economy,” said Rudolf Minsch, the chief economist at business lobby economiesuisse. “This is the price you have to pay.”

On Monday, the franc briefly touched 1.03 against the euro, hitting its strongest level since 2015. The spike was driven, in part, by the crisis in Ukraine, which boosted demand for safe haven assets.

The franc has been on an almost non-stop appreciation against the euro since September, also thanks to low inflation relative to the neighboring euro area. Swiss consumer-price growth was just 1.3% in December, well below the 5% rate in the single currency zone.

Despite that strength, the franc’s latest gains aren’t a huge concern so far for companies which have generally hedged their exposure to franc fluctuations -- a painful lesson many learned in 2015 when the Swiss National Bank unexpectedly scrapped its cap on the euro.

“It is a different situation than we had in 2015,” said Ivo Zimmermann, a spokesman for the Swiss industry group Swissmem. “The purchasing power of the Swiss franc has declined significantly since then.”