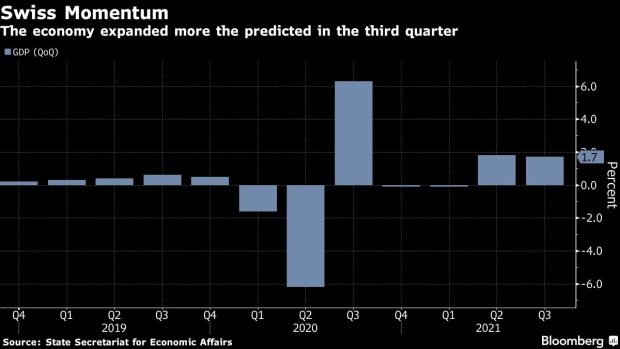 (Bloomberg) -- The Swiss economy expanded more than expected in the third quarter, as consumers returned to restaurants and entertainment venues following lockdowns.

Gross domestic product increased 1.7% in the three months through end-September, beating a forecast of 1.6%. Accommodation and food services surged by an eye-watering 110.6%, while arts and entertainment increased 24.9%. Trade sank 3.9%.

The Swiss economy has weathered the pandemic without a surge in unemployment or insolvencies, thanks in part to a large pharmaceuticals sector. Manufacturing activity is strong and the KOF economic barometer is running above its long-term average.

GDP was more than 1% above its pre-pandemic level in the third quarter, Switzerland’s State Secretariat for Economic Affairs said. That’s in contrast with neighboring Germany, which has yet to fully recover from the drop in output.

Another round of pandemic business closures as well as the strength of the nation’s currency against the euro could curb activity again. With traders on edge due to the discovery of a new variant of the coronavirus, the franc has breached the 1.05 per euro mark that some investors considered a key line in the sand.