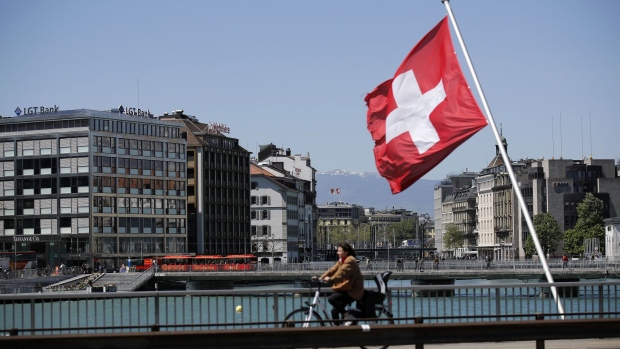 A cyclist passes a Swiss national flag on a bridge in Geneva, Switzerland, on Tuesday, May 14, 2019. While the Swiss city has largely recovered from the end of secrecy at financial institutions, which shrank the number of banks there by a quarter since 2005, it faces questions about its allure for international businesses and the world’s wealthy. , Bloomberg

At the end of 2019, some 6,000 suspicious activity reports were languishing at the Money-Laundering Reporting Office of Switzerland (MROS) because of understaffing and the fact they continue to be submitted as paper documents not electronically, its former chief Daniel Thelesklaf told the newspaper in an interview.

“We are still stuck in the 19th century technically speaking,” Thelesklaf said.

A message left with the MROS press office seeking comment wasn’t immediately returned. Thelesklaf resigned in June, less than a year after taking the job.

In 2015, federal authorities and the governments of Switzerland’s three financial centers in Zurich, Geneva and Ticino confiscated 190 million Swiss francs ($209 million), he said. Swiss banks that year reported 4.8 billion francs in suspicious money, 25 times as much.

Since 2016, he said, the country’s banks have been reporting 12 billion to 17 billion francs in suspect transactions and MROS cannot keep pace, he said. To better fight corruption, anyone bringing in say, 50 million francs into the country must prove that it’s clean, he said.

“When it comes to money-laundering, Switzerland still only does the absolute minimum because of foreign pressure,” he said.