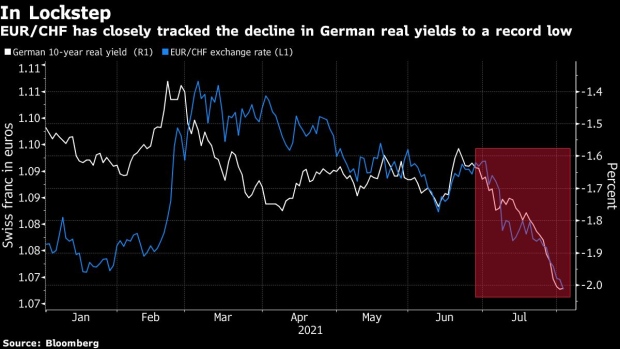 (Bloomberg) -- The Swiss franc climbed to its strongest level against the euro this year while the yen rallied to its highest since May, underscoring persistent demand for havens as the spread of the Covid-19 delta variant threatens global growth.

The Swiss currency gained to 1.0729 per euro, the strongest level since November, and is now up more than 3% from its February low. It also rallied for a seventh session against the dollar, its longest streak since April. The yen, meanwhile, advanced 0.3% to 108.91, its strongest rate since May 26.

Demand for the havens -- which are the two best-performing major currencies over the last month -- is the latest evidence that risk sentiment and growth expectations remain fragile, which could delay central banks’ exits from ultra-accommodative policies. Recent signs of caution have emerged across markets. U.S. Treasuries 10-year yields dropped last month by the most since March 2020. Meanwhile, traders in China are boosting wagers on another round of policy easing.

“The rising cases of the delta variant has tempered somewhat the optimism that was building regarding the strength of recovery of the major economies,” said Stuart Cole, head macro economist at Equiti Capital. “This rise in risk aversion is benefiting the likes of the franc and yen.”

Concerns about declining commodity demand pushed resource-based currencies lower with the Canadian dollar slumping the most in two weeks.

Global bouts of risk aversion typically drive investors into the Swiss franc, and the SNB has battled a too-strong currency for more than a decade. Its monetary policy -- consisting of negative interest rates plus a pledge to wage currency market interventions if needed -- is designed to stem the franc’s appreciation.

Still, speculators remain bullish on the franc. That could test the Swiss National Bank’s tolerance for a stronger currency, which has also been partly buoyed by a domestic economy that’s gathering momentum and improving vaccine rates.

The euro-franc pair has “tracked the move lower in European real yields very closely, as the SNB has not intervened in FX markets to counter the CHF appreciation trend,” Morgan Stanley strategists including John Kalamaras said. “Overall, the market seems under-positioned for a move lower in the franc if U.S. and global yields start moving higher again.”

The drop in yields globally are supporting “low yielders” like the yen and the franc, according to Manuel Oliveri, a currency strategist at Credit Agricole. They “simply lose rate disadvantage.”