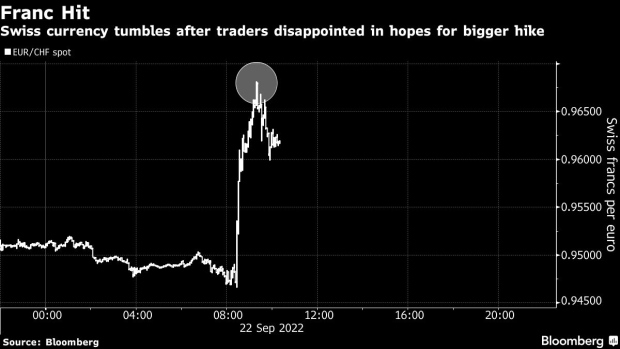 The cross of the Swiss national flag sits on Swiss franc banknotes in an arranged photograph in Bern, Switzerland, on Saturday, March 14, 2020. Pressure is intensifying on the Swiss National Bank to join policy makers around the world who’ve cut interest rates and increased stimulus in response to the coronavirus outbreak. Photographer: Stefan Wermuth/Bloomberg , Bloomberg

(Bloomberg) -- The Swiss franc dropped the most since 2015 against the euro after the Swiss National Bank’s 75 basis-point interest-rate hike proved not enough to satisfy traders’ expectations.

The currency slid more than 2% against the euro following the SNB raising its key rate to 0.5%, as expected by economists. While the SNB said it would consider an unscheduled monetary policy move, President Thomas Jordan told Bloomberg there would be a high bar for such a decision.

“The decision has seen euro-franc and pound-franc shorts squeezing higher as the ‘whisper’ was for a bigger hike,” said Vasileios Gkionakis, a currency strategist at Citigroup Inc., in a note to clients.

Still, some see this as only a temporary setback for the currency, which hit a seven-year high versus the euro earlier on Thursday, as it’s poised to benefit in a gloomier growth backdrop given its haven status. Jordan said the SNB was ready to be active both ways in the currency market.

To help adjust to its exit from negative rates, the SNB decided to tier the remuneration of banks’ sight deposits. Up until a certain threshold, financial institutions get the policy rate, and after that zero percent applies. That “does not help” the franc, said Gkionakis. The ECB decided this month to remunerate commercial bank deposits at its deposit rate, now at 0.75%.

“The Swiss franc has been hit hard temporarily by a scaling back of more aggressive rate-hike expectations,” said MUFG currency analyst Lee Hardman.