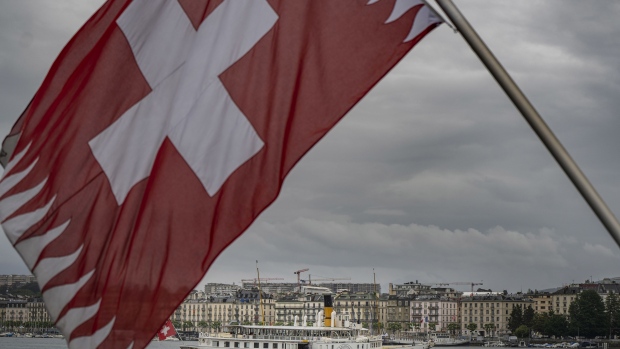 A pleasure boat sails on the waters of Lac Leman in Geneva, Switzerland, on Tuesday, May 31, 2022. Switzerland reports their Consumer Price Index (CPI) figures on June 2. , Bloomberg

(Bloomberg) -- The Swiss franc rose to parity with the euro for the first time since the outbreak of the war in Ukraine, with traders piling into the so-called haven currency as concern about risks to global growth intensified.

The euro-Swiss franc pair fell as much as 0.8% to 0.99959 per euro, the lowest level since March 7. The currency has been strengthening since the Swiss National Bank unexpectedly hiked rates by 50 basis points earlier this month and remains ready to hike again to tame inflation if necessary.

“Growing bullish sentiment is building on long Swiss franc positions and hedges on the basis the Swiss franc should perform well and the euro adversely given the global asset backdrop and interest rate expectations ahead,” said Neil Jones, head of foreign-exchange sales to financial institutions at Mizuho. He added the latest leg lower was likely also due to month- and quarter-end flows.

The Swiss franc also climbed against the dollar, which sank 0.8% to 0.9495, its lowest since April. Risk appetite was dwindling Wednesday on renewed worries about economic growth, prompting European equities to snap three days of gains.