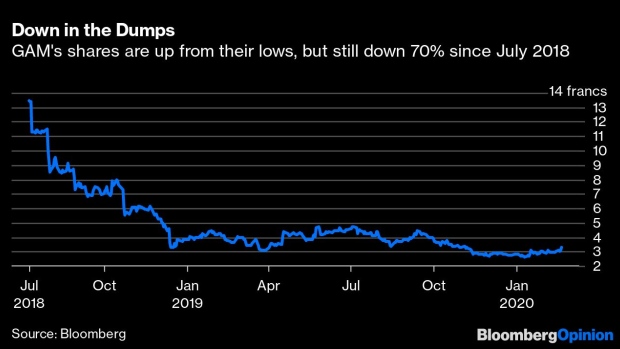 (Bloomberg Opinion) -- GAM Holding AG will probably never fully recover from the destruction in market value triggered by the sanctioning of former star investor Tim Haywood in mid-2018. Thursday’s results, though, suggest the firm is belatedly adapting to its straitened circumstances, at least partly in response to external pressure from a pair of activist investors.

Bluebell Capital Partners and Krupa Global Investments last month called for a more interventionist approach from Chief Executive Officer Peter Sanderson, who took over in September after the scandal cost Alex Friedman his job in November 2018. Sanderson, formerly of BlackRock Inc., has responded by scrapping both the dividend for shareholders and bonuses for senior executives, streamlining the board and doubling planned cost savings.

A jump of as much as 10% in the share price, driving gains from the January low to more than 25%, provides a sliver of comfort to long-suffering shareholders — but no more than that given the scale of the collapse in the company’s market capitalization in recent years.

Sanderson has hired his former BlackRock colleague Steve Rafferty as chief operating officer, presumably with a mandate to cut the multiple back-office systems the firm uses to a single platform which will reduce outgoings. Staff cuts of 13% last year trimmed GAM’s wage bill by 9%, with the company now planning to reduce costs by 80 million Swiss francs ($81 million). But the relentless pressure on how much investment firms can charge for managing other people’s money saw the operating margin plummet to 4.3% from more than 25% in 2018.

Customers pulled money from every asset class last year, with fixed income seeing the biggest net outflows followed by equities. GAM has seen the assets in its investment management business drop by 43% since the middle of 2018 — a disastrous performance by any measure.

Stanching those outflows will be the key to improving the company’s metrics. GAM says it’s “seeing stabilization of net flows,” which should be helped by a recovery in performance by the company’s portfolio managers.

Some 74% of its assets beat their benchmarks in the past three years, up from 66% in 2018. The five-year trend shows a similar improvement. Delivering index-beating performance is the best way for GAM to revive its profitability and its share price, while hushing those activist shareholders.