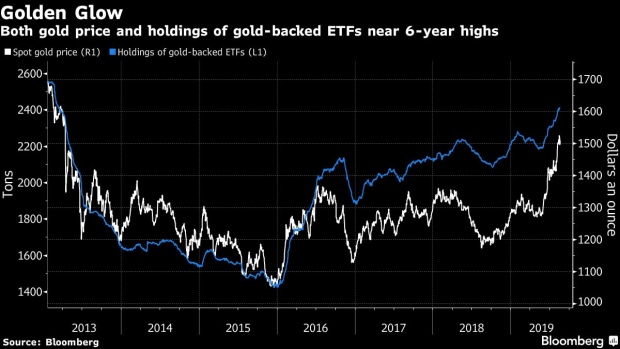 Gold bars sit in a stack as an employee pours molten fine gold into an ingot mold during gold bar production at Oegussa GmbH's gold and silver separating plant, a unit of Umicore SA, in Vienna, Austria, on Friday, Jan. 16, 2015. The Swiss central bank's surprise move to abandon the franc's cap against the euro sent investors rushing to gold as a haven from swings in currencies. Photographer: Lisi Niesner/Bloomberg , Photographer: Lisi Niesner/Bloomberg

(Bloomberg) -- Swiss gold exports to the U.K. rose to the highest in six years, driven by a surge in demand for exchange-traded funds.

Switzerland shipped 90.7 tons of bullion to the U.K. in July, the most since September 2012, according to data on the website of Swiss Federal Customs Administration. That compares with just 7.4 tons in June.

Gold is heading to London because the city is a global center for precious metal storage and boasts a vast network of vaults within the M25 motorway that surrounds the metropolitan area. Rising gold prices are driving demand for investment products and the bullion that underlies those funds.

“The vast majority of ETFs have their vaults in London,” said Adrian Ash, research director at BullionVault Ltd.

Gold prices have surged to a six-year high, surpassing $1,500 an ounce, because of worries about weakening global economic growth and the fallout from the U.S.-China trade war. Holdings in bullion-backed ETFs now stand at the highest since March 2013.

To contact the reporter on this story: Rupert Rowling in London at rrowling@bloomberg.net