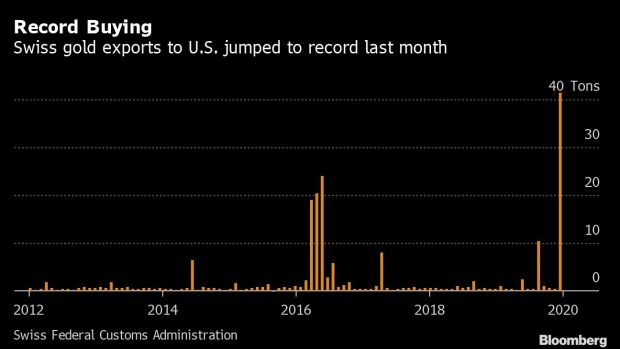 (Bloomberg) -- Gold exports from Switzerland to the U.S. soared in March as American investors rushed to buy bullion amid the virus-driven panic.

Shipments to the U.S. from Europe’s biggest precious-metals refining hub rose to 43.2 tons, the highest in data going back to 2012, according to the website of the Swiss Federal Customs Administration. That was almost half of Swiss gold exports last month as deliveries to traditional destinations such as India and the U.K. dropped. There were no shipments reported to mainland China.

U.S. buyers scrambled to import gold last month amid fears there might not be enough bullion in New York to deliver against futures contracts traded on the Comex. Lower production at some key refineries, including in Switzerland, and historic disruption in global travel has fueled volatility, with prices in key trading hubs moving apart.

Comex gold stockpiles have more than doubled to a record since late March. As producers slowly restart after virus-led shutdowns and gold suppliers turn to charter flights, spreads between gold prices in London and New York narrowed over the past week to about $19 an ounce. While that’s less than a third of the spread earlier this month, in normal times it’s just a few dollars.