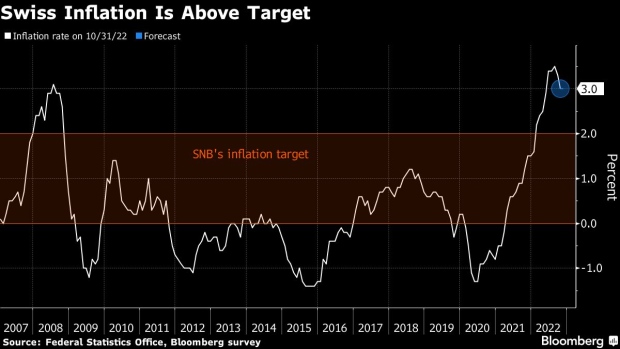 (Bloomberg) -- Inflation in Switzerland probably stayed above the central bank’s target for a 10th month in November, supporting the case for another sizable rate increase in December.

Data on Thursday are set to show that consumer prices were up 3% from the previous year, according to the median forecast in a Bloomberg survey of economists. While that’s down from a 3.5% peak in August -- the highest reading since the early 1990s -- it’s still 1 percentage point above the Swiss National Bank’s target.

The SNB warned in September that inflation would average above 3% through the first quarter of 2023.

January may see another uptick as that’s when rising electricity costs get passed on to consumers -- Swiss utility companies can only raise prices at the start of each year. The country’s power regulator expects price jumps of 27% on average. This could add as much as 0.6% to the inflation reading, according to economists.

Central bank chief Thomas Jordan and his fellow rate setters have repeatedly hinted at another hike in December, though the size of such action is unclear, with analysts in Bloomberg’s most recent survey now predicting another 75 basis points.

The institution has already increased borrowing costs by 125 basis points this year. That means it lags the European Central Bank, which has raised by two percentage points and is set to go for at least 50 basis points in December, adding additional pressure on the Swiss to go big.

Still, given the euro area’s inflation rate is three times the one in Switzerland, SNB officials have more leeway than their counterparts in Frankfurt.