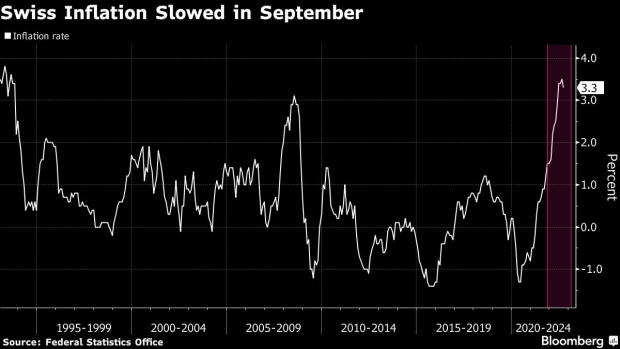 (Bloomberg) -- Inflation in Switzerland unexpectedly slowed in September on a weaker rise in energy costs, defying soaring prices across Europe.

Swiss consumer prices rose 3.3% from a year earlier, data from the Federal Statistics Office showed Monday. While the reading is much lower than the 3.6% economists had expected, it still means that inflation has exceeded the Swiss National Bank’s 2% target for an eighth month. Core inflation, which strips out volatile elements, hit 2%.

Based on the European Union-harmonized measure, Switzerland’s inflation was at 3.2%, compared with 10% in the euro zone, which just touched double digits for the first time ever.

Almost one-third of manufacturers surveyed are worried about production outages in the next six months due to high energy prices, with 36% of those also seeing a risk of short-time working.

Some 60% of companies reported an increase in purchasing prices in September, according to the survey, indicating that they are rising more broadly again.

Rising consumer prices in other European countries are a key reason for strong inflation in Switzerland. According to a recent SNB report, import prices in August rose 8.6% from a year earlier. Still, the Swiss central bank’s decision to let its currency appreciate has kept inflation much lower than elsewhere in the region.

In order to combat high prices, the SNB has increased interest interest rates by 125 basis points since June, and officials may raise borrowing costs again at their next scheduled policy meeting in December. If the inflation outlook changes, another hike could also come before that, though SNB President Thomas Jordan has set a high bar for such a move.