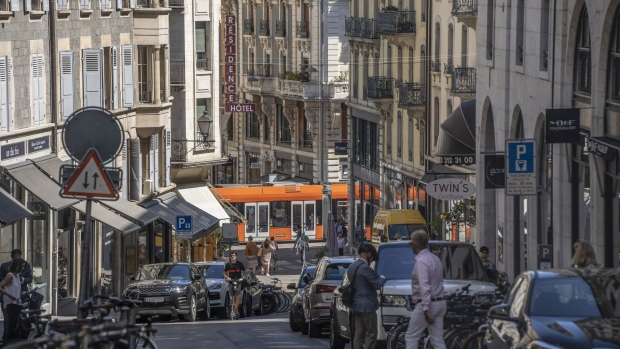 Residential apartments above retail stores in the old town district of Geneva, Switzerland, on Wednesday, Aug. 3, 2022. The Swiss residential real estate market is at a risk of a large and abrupt correction if interest rates rise quickly, according to Switzerland’s central bank. Photographer: Jose Cendon/Bloomberg , Bloomberg

(Bloomberg) -- Swiss voters are likely to endorse a project to reform the country’s national social-security system but are evenly split on whether to back an initiative to change withholding-tax rules, according to a new poll.

By contrast just 49% of voters said they’re certain or likely to endorse the plan for withholding tax, 16% are undecided, and 35% of those polled said they’d definitely or probably oppose it. The initiative intends to encourage the issuance of debt by Swiss companies by exempting domestic bonds from the tax.

A proposed initiative calling for “no to intensive farming” has the backing of 51% of certain or likely voters, with 46% leaning towards opposing or definitely against the suggestion.