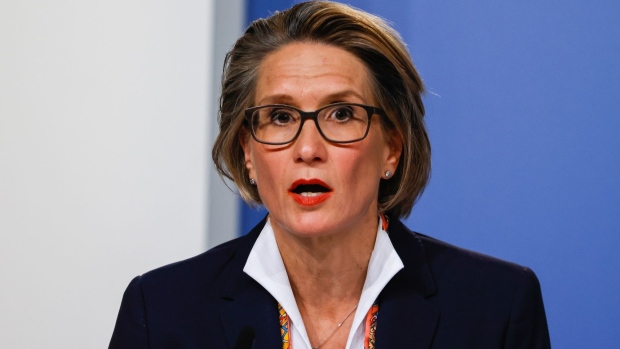 Andrea Maechler, member of the governing board of the Swiss National Bank (SNB), speaks during the bank's rate announcement news conference in Bern, Switzerland, on Thursday, June 17, 2021. The Swiss National Bank kept up its ultra-expansive monetary-policy stance aimed at thwarting any appreciation of the franc and insisted that any nascent inflation pressures it’s seeing won’t endure. , Bloomberg

Actively pushing for a green transformation of the economy could undermine the effectiveness of the Swiss National Bank’s monetary policy, Governing Board Member Andrea Maechler said.

While the SNB takes climate change very seriously and is buying green bonds as part of its reserve management, officials need to remain within the bounds of their mandate, Maechler said in a video interview for the University of St. Gallen.

“It could really bring conflict of interest,” she said.  “When we use monetary policy tools for that purpose, they may be helpful to move in that direction, but they’re detrimental to the effectiveness of monetary policy.”

With more than 900 billion francs ($979 billion) worth of foreign exchange reserves, climate activists have long urged the SNB to use its financial heft to combat global warming.

Although Switzerland’s central bank has decided to stop investing in companies whose principal business is coal mining, it is treading more cautiously than its euro-area counterpart. The European Central Bank has committed to incorporating climate change considerations into its monetary policy framework.

Maechler said there were a number of things the SNB could do, such as use its expertise with data and modeling to help officials get a better sense of the risks to the economy and the stability of the financial system.

“We do not have the right tools to promote a green economy. The right tools would be taxation, regulation -- that is not something we have,” she said.  “Each of us has to play its own role.”