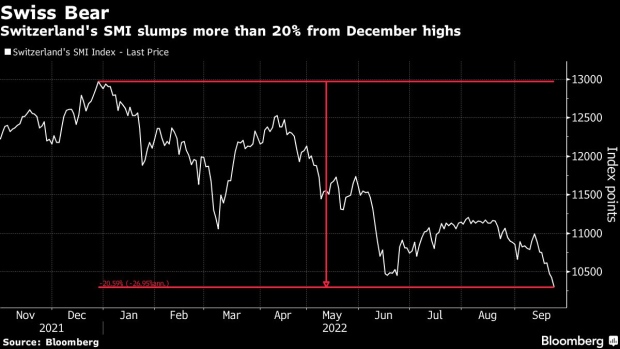 A Swiss national flag hangs in view of the Swiss National Bank (SNB) in Bern, Switzerland, on Friday, April 26, 2019. The Swiss National Bank is in no position to raise interest rates given markets are still in a "fragile" state, according to President Thomas Jordan. Photographer: Stefan Wermuth/Bloomberg , Bloomberg

The SMI Index fell 1.3% on Thursday at the lowest level since November 2020, bringing the decline from the December record high to 21% and entering a technical bear market.

Despite Swiss stocks’ haven-like reputation, the index has been weighed down by growth stocks’ getting hit amid widespread pessimism around rate hikes and rising bond yields. The biggest decliners this year include Roche Holding AG, Nestle SA and Sika AG.

While banks usually benefit from a higher rates environment, Credit Suisse Group AG’s hurdles have also weighed on the index, with the stock hitting a record low today on a report that it’s weighing an exit of the US market as one of various scenarios for a strategic revamp.

The Swiss index is one of the last major regional index to cross this threshold after German DAX and the Euro Stoxx 50 closed in bear territory in March, and the S&P 500 followed in June amid concerns about the central banks’ staunchly hawkish stance. Zurich policy makers are trying to contain inflation that is above 3%, but remains a fraction of that of surrounding countries.

Despite this year’s declines, the SMI trades at 14 times estimated earnings, compared with 10 times for the Euro Stoxx 50, with Bloomberg Intelligence strategists calling it “ever-more extreme.”

Seek Quality in a Storm? No, and Don’t Hide in Swiss or Swedes

Switzerland’s economy has long been more resilient despite regional headwinds. Economists surveyed by Bloomberg reckon it will keep growing until the end of next year, while slowdowns are predicted for the euro zone’s three largest economies.