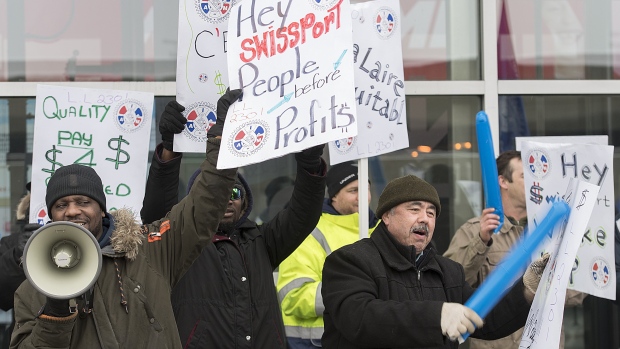 MONTREAL -- Swissport Canada Inc. has reached a second agreement in principle with airplane refuellers after a nearly one-month strike in Montreal.

The company and the International Association of Machinists and Aerospace Workers union say a tentative deal was reached early Wednesday following a mediation session.

An initial tentative agreement reached on Dec. 21 was rejected by union members, leading to a strike Dec. 31 by more than 100 union employees.

The union declined to provide details of the deal before it is presented to members Thursday.

A union spokesperson says employees will return to work no later than Tuesday if the deal is approved.

The strike at Montreal's Pierre Elliott Trudeau International and Mirabel airports includes aircraft refuellers as well as mechanics, dispatchers and maintenance workers of fuel storage facilities who have been without a contract since August.