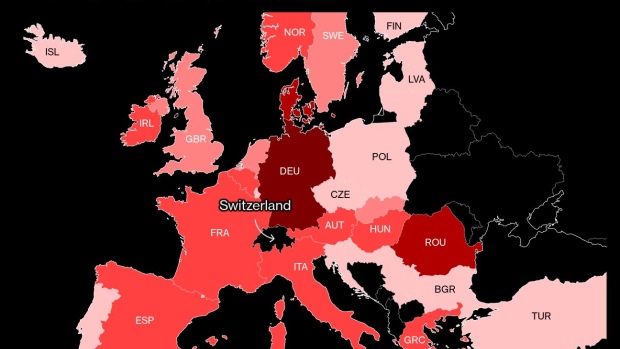 (Bloomberg) -- Switzerland took a crucial step toward allowing other countries to re-export Swiss-made armaments to Ukraine.

The relevant committee of the parliament’s lower house on Tuesday adopted a motion that would allow for the re-export of weapons to conflict zones under certain conditions. The initiative was accepted with 14 to 11 votes, it said on Tuesday.

One of the next steps would be for the parliament’s entire lower house to decide.

The motion calls for allowing the Swiss government to revoke non-re-export clauses in agreements with other countries, if the weapons in question are to be shipped to a conflict which has been condemned as violating international law by a two-third majority of the United Nations General Assembly.

Traditionally neutral Switzerland has faced criticism from Germany and Spain over blocking shipments of Swiss-made ammunition to Ukraine.

The shift in parliament became possible after the Social Democrats gave up their firm stance. According to the committee, the decision doesn’t contradict neutrality because Switzerland wouldn’t ship arms directly to a conflict zone but would only allow other countries to do so.

“The majority of the committee is of the opinion that Switzerland must make its contribution to European security and accordingly provide more support to Ukraine,” lawmakers said in their statement.

(Updates with details from fourth paragraph)