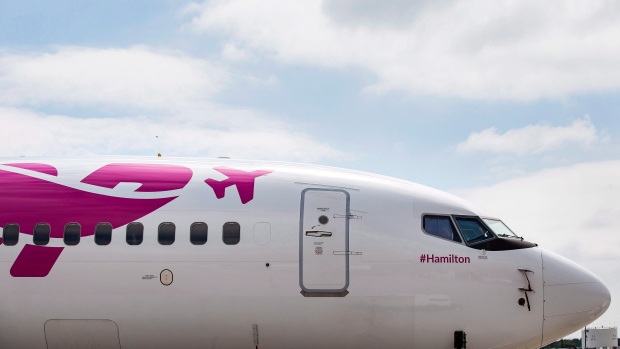 Swoop will become Canada's first ultra low cost airline to fly to the United States when it launches service this fall to five popular tourist destinations in Florida, Nevada and Arizona.

The subsidiary of WestJet Airlines Ltd. (WJA.TO) will start Oct. 11 with flights to Las Vegas from Abbotsford, B.C., and Edmonton, Alta., about four months after Swoop began to fly.

Service will be added over the following couple of weeks between Hamilton, Ont., and Las Vegas as well as to the Florida cities of Fort Lauderdale, Orlando and Tampa Bay. Flights between Edmonton and Phoenix will start Oct. 27.

Most destinations will be serviced a few times per week but daily service will be flown between Edmonton and Las Vegas.

The transborder service will be launched to these U.S. gateways as Swoop receives delivery of its fifth and sixth airplane, said Swoop president Steven Greenway.

"They really blend well to the model that we provide in terms of low cost, high volume type of leisure profile that we definitely are targeting," he said in an interview.

Everyday one-way fares start as low as $149 including taxes and fees through April, however it will offer 4,100 seats at low promotional fares of $99 and $119 for travel booked online until Feb. 13.

The airline's model is based on passengers paying ancillary fees for additions such as bags, premium seats, and Wi-Fi that inflate travel costs depending on individual passenger needs.

Swoop currently receives about $36 per passenger, twice the level at WestJet. But more of these non-fare revenues are expected to be generated as others services are added like car rental, hotel, third-party travel insurance and beefed up food and drink offerings.

"As we mature, as we grow the airline, that's really where we start seeing some differences," Greenway added, declining to forecast potential per passenger ancillary revenues.

WestJet's goal is to use Swoop's low fares to stimulate demand from people who don't typically fly and help to repatriate some of the five million Canadian travellers who cross the border to depart from U.S. airports.

"I think we can get a reasonable chunk both out of Abbotsford and Hamilton," he said.

While the low Canadian dollar is making U.S. flights more expensive, the launch of Swoop's service should also help increase Canadian transborder demand and Americans flying to Western Canada, Greenway said, adding prices are likely not low enough to persuade Americans to fly out of Canada for destinations in their own country.

The U.S. expansion will see Swoop operate to a mix of secondary airports -- Phoenix-Mesa Gateway Airport -- and highly popular ones like McCarran International Airport in Las Vegas where there are no alternatives.