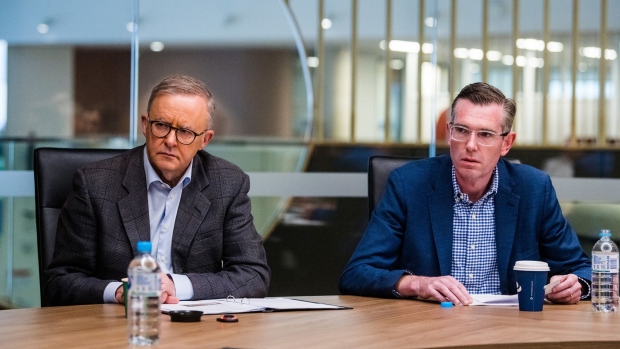 (Bloomberg) -- Australia’s prime minister warned that the floods leaving large swaths of Sydney submerged are still dangerous and yet another wake-up call for urgent action on climate change.

Anthony Albanese said the government has requested defense personnel to aid clean-up efforts as he toured badly affected areas on the north-west outskirts of the city on Wednesday morning. He announced a financial support package for people worst impacted by the fourth major flood in New South Wales state in 18 months.

In a joint briefing with state Premier Dominic Perrottet in Sydney, the new leader said the latest deluge is a sign “we need to act on climate change.”

“We need to show leadership and encourage that action,” Albanese told reporters. “That is one of the reasons why my government is taking climate change seriously and engaging with the world to ensure that global action steps up.”

Video footage and images on social media showed homes and vehicles under water, with the suburb of Windsor -- one of Albanese’s tour sites -- resembling a giant lake. Authorities said the river systems across the Sydney basin are still full, with some at “major” flood levels.

A series of natural disasters in Australia, including bushfires and droughts, has put national climate policy into sharp relief, and a new Labor government vowing tougher action was elected in May. The floods are also triggering fresh debate over where to house a growing population and the cost of insuring homes prone to damage as so called one-in-100 year events become increasingly common.

Perrottet said about 85,000 residents have been warned they should prepare to evacuate, up from 50,000 on Tuesday. Flood damage assessments will begin today as Sydney enters a fifth day of rains.

The floods have also hit major cropping regions and may lead to reduced wheat and canola production. Still, the affected areas are a relatively small part of the total land devoted to farm production in the country, where the state of Western Australia is particularly dominant.