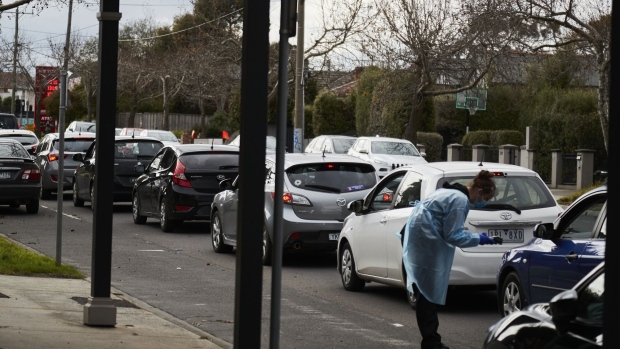 A drive-thru Covid-19 testing facility set up in the Fairfield suburb of Melbourne, Australia, on Thursday, July 22, 2021. Australia has been hit hard by renewed infections from the delta strain of coronavirus that has now pushed half of the country into lockdown, including its two largest cities. , Bloomberg

(Bloomberg) -- Sydney’s month-long lockdown shows no signs of being eased as the city’s daily Covid-19 cases keep climbing, even as other Australian cities move to open back up after bringing their clusters under control.

New South Wales Premier Gladys Berejiklian said Tuesday that the state had recorded 172 new cases from the day before, a record since the latest outbreak emerged in mid-June, fueled by the highly-contagious delta variant. The new peak came as authorities in both Adelaide and Melbourne -- Australia’s second-largest city -- announced that they would lift their own lockdowns at midnight.

Like other so-called “Covid zero” economies including Singapore and Taiwan, Australia is learning that the emergence of variants like the delta strain are compromising strategies that previously worked to keep the virus out of local communities. Sydney recorded 901 new cases in the week to Monday --jumping from 683 in the previous seven days.

Berejiklian has been criticized by some health experts for being too slow to implement lockdown in the city of 6 million people in a bid to keep the nation’s most economically-important state open for business. There’s growing concern that the inability of New South Wales authorities to reduce new case numbers may mean it needs to stay isolated from the rest of the country for weeks or even months to come.

“We need to get the number of infectious people in the community close to zero as possible before we open up,” she said at Tuesday’s briefing. Sixty of the new daily cases were infectious while mingling with people out of their own households, she added. While the current lockdown is due to end on July 31, she is due to announce new measures in the coming days.

Melbourne, meanwhile, entered an initial five-day lockdown on July 15 that was later extended. It marked the fifth time the city has been under such measures since the pandemic began.

Victoria Premier Daniel Andrews said that while the stay-at-home orders would be removed at midnight and schools would reopen Wednesday, strict density limits would remain on hospitality and retail venues.

Australia has largely managed to limit Covid’s impact on public health through strict quarantines, snap lockdowns and a closed-border policy that even bans citizens from leaving. But a slow vaccine rollout has left it exposed to outbreaks as newer, more virulent strains slip through border curbs, including an increasingly fragile hotel-quarantine system for returning residents.

Australia has administered enough doses for just 22% of its population, according to Bloomberg’s Vaccine Tracker, compared to 54% in the U.S. and 63% in the U.K. AstraZeneca Plc’s shots have comprised the bulk of the rollout so far, but mixed messaging over the jab’s safety has caused some vaccine hesitancy.

What Makes Delta the Most Disruptive Virus Variant: QuickTake

Prime Minister Scott Morrison has defended his government’s vaccine strategy, saying an accelerated rollout puts it on track to provide enough jabs for all Australians who want them by the end of the year. Still, he hasn’t offered a timeline for reopening or indicated how many Australians would need to be vaccinated before that could happen.

In the meantime, the economic impact of lockdown continues. Australian Treasurer Josh Frydenberg -- who has said the lockdowns in Sydney, Melbourne and Adelaide were collectively costing the economy about $220 million a day -- told The Australian Tuesday that it “won’t be surprising if the September quarter is negative.” It was too early to tell for the the December quarter, he said.