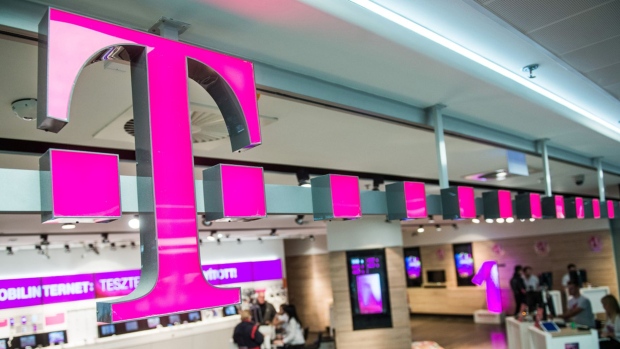 (Bloomberg) -- T-Mobile US Inc., which built its reputation offering cut-rate phone service, has something new to crow about: a high-end plan for well-heeled subscribers who want unfettered 5G access.

Starting Wednesday, T-Mobile will offer its new Magenta Max mobile phone plan for $90 a month with no data cap. Unlike rivals Verizon Communications Inc. and AT&T Inc. -- which slow or throttle connection speeds when subscribers reach a monthly data cap of 50 gigabytes and 100 gigabytes -- T-Mobile says it’s setting no limits on the new plan.

T-Mobile’s ascent from the discount king of the wireless industry to a premium purveyor follows a network expansion that it says rivals can’t match.

“This is a plan that basically gives you unlimited speeds, as fast as the network can deliver,” T-Mobile Chief Marketing Officer Matt Staneff said in an interview.

The never-throttled plan opens a new battleground -- beyond free iPhones, complimentary streaming services and price cuts -- where carriers can try to attract the heaviest users and the biggest spenders.

T-Mobile, the second-largest U.S. wireless carrier, got a head start on its mobile service peers in so-called low-band and mid-band 5G airwave capacity. T-Mobile’s superfast 5G network covers about a third of the country, and the company plans to double that by year-end.

But Verizon and AT&T aim to catch up. They’re setting up pockets of superfast high-frequency 5G in several cities. And all three companies are bidding in a federal auction for the rights to $81.2 billion worth of midband spectrum.

Capacity advantages aren’t apparent yet, given the slow rollout of 5G phones and the lack of dramatically improved service quality. But bigger networks will be crucial down the road when new bandwidth-hogging applications are created.

T-Mobile starts its unlimited plans at $65 for one line -- including taxes and fees, and throttles during congestion. That plan has hot-spot service limited to 3G and standard-definition streaming. A four-line package would be $26 each with automatic payment.

T-Mobile’s previous top-tier plan, Magenta Plus, will be replaced by Magenta Max. The “Plus” offer cost $90 and throttled customers during times of congestion if they were using more than 50 gigabytes of monthly data. Magenta Max includes a “lifetime” Netflix subscription and 40 gigabytes of hot-spot data a month. T-Mobile has a $47-a-month-a-line promotion price for a three-line package.

AT&T, meanwhile, starts its unlimited plan at $65 plus taxes and fees for one line and includes 5G and standard definition video. Four lines runs at $35 each, plus taxes and fees. AT&T’s top-tier plan, Elite, is $85 for a single line and includes HD video, 30 gigabytes of hot-spot data and free HBO Max. But it’s throttled after 100 gigabytes of monthly data. Four lines are $50 apiece.