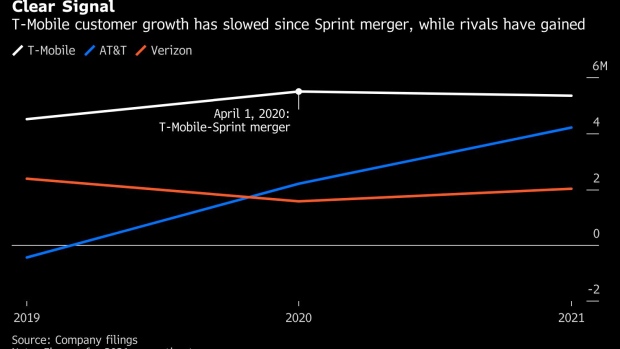 (Bloomberg) -- T-Mobile US Inc.’s merger with Sprint Corp. was supposed to create a supercharged wireless competitor pushing innovations, lowering prices and staying true to its core principle -- standing up for customers. Lately it’s been falling down.

Mergers are rarely easy and complications from the pandemic compound the situation. But beyond those challenges, something very off brand is happening at T-Mobile. At a time when industry growth is slowing and price wars are starting to break out, T-Mobile appears to be losing one of its competitive edges: customer service. Their positioning under former chief executive officer John Legere, as the little carrier that cares, helped fuel market share gains over the past six years. Now, those gains are slowing.

Things started to change in the wake of the April 1, 2020, merger. After years of rating “considerably higher” than all its major rivals on customer satisfaction, T-Mobile “slipped from above average to just average,” Consumer Reports said in October. Another survey by American Consumer Satisfaction Index showed T-Mobile fell from best to worst among the three major carriers.

The company that took pride in solving so many customer “pain points” like hidden fees and data overages and routine billing issues, was now becoming just like the competition, transferring customer service calls overseas, putting people on hold and not resolving problems quickly, according to interviews with consumers and complaints posted on social media.

Callie Field, elevated in March to be the company’s chief customer experience officer, acknowledges there have been some recent challenges. Two big events collided -- the Sprint integration and the pandemic, she said. T-Mobile customer service teams, like most office workers, relocated home.

“It had a bigger impact than I anticipated,” she said in an interview. “We lost a lot of our staff” to the great resignation. And for the remaining employees, the job got much tougher.

Field and her team have been working to correct problems. She cites ongoing strong results in customer service polls from HarrisX and J.D. Power. Dig deeper, though, and one can find reason for concern there. Although T-Mobile again topped the latest J.D. Power wireless phone survey, their score of 819 was down 33 points from the prior year and they had the biggest drop among the big three.

“T-Mobile might be the victim of its own successful marketing, of setting a tremendously high expectation,” said Ian Greenblatt, managing director of technology, media and telecommunications at J.D. Power.

Legere made customer care a rallying cry, appearing frequently at events and on social media in magenta sportswear with the company logo. The carrier built up a loyal following thanks to promotions like free tacos on Tuesdays.

The new chief executive officer, Mike Sievert, has worked at T-Mobile for nine years, first as the company’s head of marketing and more recently as chief operating officer. He was picked by T-Mobile parent Deutsche Telekom AG to succeed Legere. In sharp contrast to his boisterous predecessor, Sievert landed with a straightforward plan: squeeze out costs in the Sprint integration and capitalize on a huge advantage in 5G against Verizon Communications Inc. and AT&T Inc.

Sievert, in an email, said T-Mobile is only getting better. “We are delivering the best service in this industry by any objective measure,” he said. The combination with Sprint isn’t hurting the elements that made the company stand out before. “Our culture is a big part of what differentiates us and it’s thriving and growing through a merger and a pandemic,” he said.

Not everyone sees it that way. Diana Cordoba, a former saleswoman at a T-Mobile branch in Orlando, Florida, remembers the buzz her store used to have, whipped up by Legere’s “un-carrier” branding. People were ditching their previous providers and eagerly signing up to get T-Mobile perks like free Netflix. Work felt like a winning, welcoming place to be -- plus the commissions were great, she said. In fact, it was such a good gig she convinced two close friends to apply and join her at her store.

The Sprint deal brought an end to that. Soon afterward, commissions were cut, managers were being let go, Legere was gone and the work environment became stressful, said Cordoba, 23. “They stopped putting their customers and employees first and started caring only about money like every other corporation,” she said.

Cordoba quit in June, ending three years with T-Mobile. The months of walking on eggshells left her emotionally exhausted. Within weeks her friends quit for the same reason, she said.

“Anyone that was with the company when Legere was there can agree that the changes were made for the worse once he left and the values were not the same,” Cordoba said.

Legere’s absence is noticeable, not just to his 6 million Twitter followers. His active presence on social media and his willingness to fix problems was a rare bit of “role modeling” by a CEO, said Robbie Baxter, a consultant and founder of Peninsula Strategies. She cited T-Mobile’s approach to customers as an example of a disruptive industry innovation in her 2015 book “The Membership Economy.”

“Under Legere, T-Mobile differentiated on customer-centricity,” Baxter said in an interview. “It seems as if that strategy is no longer a priority.”

T-Mobile has lost some luster for investors also. After outperforming the pack last year, the stock is down about 18% in 2021, neck and neck with AT&T’s 19% decline and worse than Verizon’s 13% slump.

Customer outcry, while always a big feature of online discourse, has gotten more targeted. Complaints on Twitter started to point at the merger as the cause of the changes. People that had signed on earlier with T-Mobile and praised the high level of customer care, were now saying they regretted the move, blaming the new regime.

One recurring theme is that problems that used to be solved quickly and directly, were now being handled by call centers in the Philippines where staff stick to scripts and lack authorization to fix issues. Reddit, the online topic forum, even has a discussion board called “T-Mobile is turning into Sprint.” The California Public Utility Commission, meanwhile, said its complaints about T-Mobile service hit 80 this year from 16 in 2019, a rise it blames in part on the merger.

“With mergers, you don’t know which culture will take hold, but typically the one with the worse culture tends to pull the other one down,” said Shep Hyken, a customer service guru.

Years ago, when T-Mobile wasn’t able to compete on network service quality, the focus was on “being a challenger, being a customer advocate, talking to consumers in a different way,” said Michael Dunn, chairman of Prophet, a marketing consultancy.

T-Mobile’s message lately has been more promotional, said Dunn, whose firm previously worked with the company.

Dunn said T-Mobile’s approach now is: “‘I’m gonna give you $1,000 for a device, but so is everybody else.’ That’s not new, that’s not different. You’re not showing up in a way that’s challenging the category. You’re all just kind of doing the same thing together now.”

Field, T-Mobile’s customer service chief, said she’s sympathetic to consumers who’ve had service issues, but to those who say there’s been a change in the culture -- not so fast.  “I would challenge them on that because the same leader and the same team that was running hard at customer experiences, is the team that’s here today,” she said.

To address staffing issues, T-Mobile raised its base pay from $15 an hour to $20 and is recruiting to fill 5,000 jobs in the next 18 months. There’s been some improvement already, according to Field. Customer care teams are seeing fewer calls being escalated to managers and resolution times are dropping.

“I will tell you, it’s never felt more competitive,” she said. “But if our message is only coming across as pricing promotions, maybe we’ve got work to do and I think that’s really valuable feedback.”