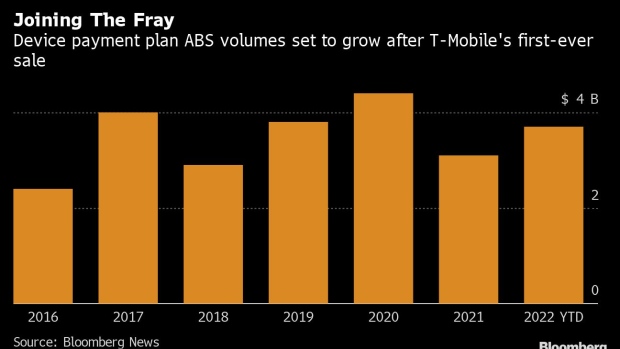 Signage for a T-Mobile store in San Francisco, California, U.S., on Tuesday, March 16, 2021. T-Mobile US Inc. is kicking off a bond sale to help finance the purchase of new high-speed spectrum licenses as carriers roll out the next generation of mobile devices. Photographer: David Paul Morris/Bloomberg , Bloomberg

(Bloomberg) -- T-Mobile US Inc. sold its first-ever bond backed by customers’ phone loans, a move that helps diversify its funding sources as the company digests its 2020 purchase of rival Sprint Corp.

The telecommunications giant on Tuesday priced its sale of $842 million of asset-backed securities. It issued $750 million to investors at a spread of 90 basis points above the US Treasury interpolated-curve, while the remainder was not offered.

With the bond sale, the wireless network operator is following a path created by competitor Verizon Communications Inc., which started issuing similar securities backed by device payment plans in 2016. Until now, Verizon’s ABS bonds had comprised the entire market for such securities, according to data compiled by Bloomberg News.

The market for phone plan-backed bonds is on track for a record this year. Issuance stands at $3.7 billion so far -- not including T-Mobile’s sale -- compared to $4.4 billion for all of 2020. T-Mobile’s issuance would bring the tally to about $4.5 billion.

“Verizon has been able to grow the maturity of this sector, with stable performance over time and I think that has really helped develop this niche consumer ABS sector into something that’s a bit more open to investors,” said Ian Rasmussen, managing director of asset-backed securities at Fitch Ratings, in an interview.

Fitch and Moody’s Investors Service are rating the T-Mobile transaction, and expect to award an ‘AAA’ grade to the largest tranche. RBC Capital Markets led the bond sale, along with Barclays Plc and Mitsubishi UFJ Financial Group.

The money raised will help T-Mobile diversify its funding sources after taking on a large debt load to pay for its April 2020 acquisition of Sprint as well as its purchase of spectrum rights. Spectrum is crucial to building out wireless networks.

Representatives for T-Mobile and the banks arranging the transaction declined to comment.

T-Mobile has been on a hot streak lately. Subscriber growth has been rising even after its purchase of Sprint put it firmly among the top three US mobile providers. Its stock price has been on a tear even as rivals Verizon and AT&T Inc. struggle, helping make the company a hedge fund favorite.

The firm has also been recently upgraded to investment grade by S&P Global Ratings, with Moody’s having given it a blue-chip rating earlier in the summer. Fitch also rates the company BBB-.

AT&T said in July that more of its customers were falling behind on their bills, a risk for a telecom company when economic growth is slowing. If T-Mobile were to face earnings pressure and possible corporate credit ratings downgrades, this securitization could be hurt, Fitch said in its presale report dated Sept. 27, in which it examined the transaction.

The collateral looks safe for now. The loans, or “equipment installment plan sale contracts,” that back the securitization are originated by T-Mobile, and have an average FICO score of 706, according to the report.

Despite the risks of a looming recession and the fact that households can now no longer count on the support of government stimulus payments, consumer finances are still in relatively good shape. Even if households begin to run low on cash, it’s likely to take a lot for them to stop making payments on their phones, analysts said.

“The payment priority of your phone plan has increased over the years, and the pandemic has pushed that even further along,” said Rasmussen.

(Updates to show the deal priced.)