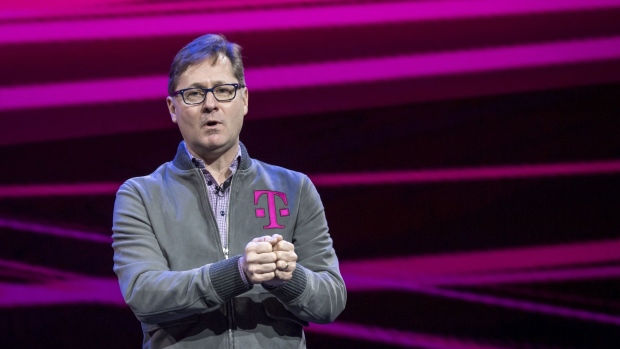 Mike Sievert, president and chief operating officer for T-Mobile US Inc., speaks during a keynote at CES 2020 in Las Vegas, Nevada, U.S., on Wednesday, Jan. 8, 2020. Every year during the second week of January nearly 200,000 people gather in Las Vegas for the tech industry's most-maligned, yet well-attended event: the consumer electronics show. , Bloomberg

“AT&T and Verizon have both announced big price increases in the last month,” Sievert said at a May 23 investor conference. “Right here, right now, in the heart of consumer anxiety about inflation, they are announcing millions and millions of people getting jacked up prices.”

T-Mobile has grown faster than its competitors over the past decade by vanquishing service contracts, expensive international rates and hidden fees. But in February, citing higher costs, the company increased certain monthly charges by 31 cents per line and 24 cents per data device. Only customers on Magenta upper tier unlimited plans and One and One Plus packages, which have taxes and fees included, were exempt from the increases.

T-Mobile said a “substantial majority” of its customers weren’t affected and that subscribers were notified in January that the fees were going up. The company said it is passing along costs and charges imposed by other providers, and that they’re smaller than the competitors’ price hikes. Still, some customers didn’t like it.

With revenue growth nearly stalled and costs increasing, wireless carriers are under pressure. AT&T in May raised rates on older service plans by $6 a month for single lines and $12 for families. Verizon is increasing fees by $1.35 a line in June, and charging business customers $2.20 more each month for mobile service.

T-Mobile committed to a three-year rate-plan price freeze as a condition of its 2020 purchase of Sprint Corp.

T-Mobile said it’s honoring that commitment but added that some fees are beyond its control. “Telco Recovery Fees are periodically reviewed and the amounts adjusted to reflect increased costs to T-Mobile over time, as these costs are not within T-Mobile’s control,” a company representative said in an email.