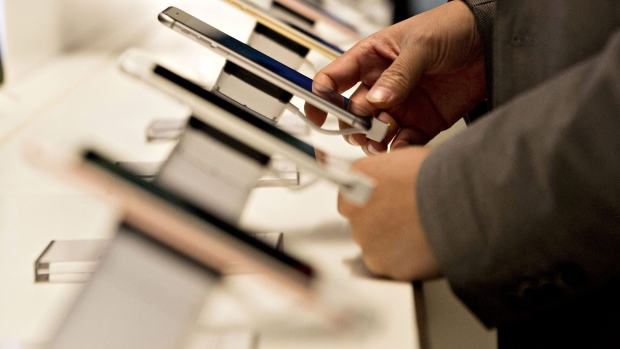 A shopper looks over a display of Apple Inc. iPhones at a T-Mobile US Inc. store in Chicago, Illinois, U.S. , Bloomberg

(Bloomberg) -- States investigating T-Mobile US Inc.’s planned acquisition of Sprint Corp. are considering a lawsuit to block the deal on antitrust grounds and may act even if the Justice Department approves it, according to two people familiar with the matter.

State attorneys general haven’t made a final decision about the merger, but are keeping all options open as they investigate whether the $26.5 billion deal harms competition and would lead to higher prices for consumers, said the people, who asked not to be named because the probe is confidential.

The states’ antitrust investigation could represent a major hurdle to T-Mobile and Sprint’s plan to combine to take on industry leaders AT&T Inc. and Verizon Communications Inc. State enforcers have the power to go to court to block the tie-up even if federal officials at the Justice Department’s antitrust division and the Federal Communications Commission approve it.

New York and California -- whose attorneys general are both Democrats -- are helping to lead a group of more than a dozen states that are reviewing the merger’s effect on competition. While T-Mobile and Sprint combined would control about 30 percent of the national wireless market, the company would have a significantly higher market share in some states. That has heightened concern among state officials about the deal, the people said.

Representatives from Sprint and T-Mobile didn’t immediately respond to calls for comment.

While states frequently investigate mergers on antitrust grounds and work alongside the Justice Department, it’s rare for them to challenge a deal on their own if the U.S. doesn’t. Still, there’s some concern among the states that political considerations could be influencing the Justice Department’s decisions on mergers, according to one of the people.

The tension stems from speculation that Makan Delrahim, the head of the Justice Department’s antitrust division, sued to stop AT&T’s takeover of Time Warner Inc. because of President Donald Trump’s incessant criticism of CNN, which was owned by Time Warner before the merger. Delrahim has denied the White House played any role in the challenge, which the division lost when the judge ruled the companies could combine.

In a sign of how serious the states are, they have hired economists to aide them in their review, including University of California at Berkeley professor Carl Shapiro. Shapiro also testified in the Justice Department’s case seeking to block the AT&T-Time Warner deal.

T-Mobile and Sprint have argued that together they can more quickly to build a fast, advanced next-generation system known as 5G. Trump has said he wants 5G technology in the U.S. "as soon as possible."

"American companies must step up their efforts, or get left behind," he said in February.

--With assistance from Scott Moritz.

To contact the reporter on this story: David McLaughlin in Washington at dmclaughlin9@bloomberg.net

To contact the editors responsible for this story: Sara Forden at sforden@bloomberg.net, Elizabeth Wollman