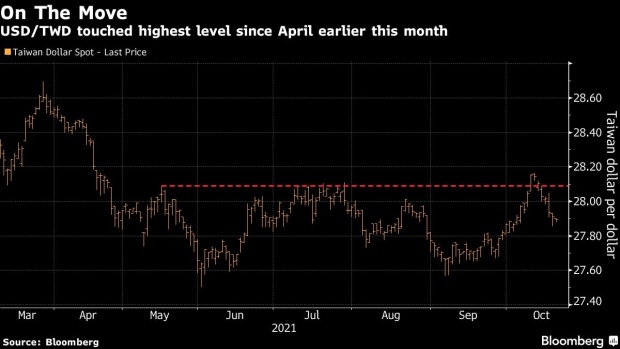 (Bloomberg) -- The Taiwan dollar faces growing headwinds from foreign outflows, after topping Asia’s currency ranking in the first nine months of the year.

Robust exports and trade surplus helped the Taiwan dollar overcome the greenback’s strength and outperform Asian currencies in the January to September period. It’s now fallen behind some of its peers as foreigners sold $2.3 billion of local equities this month, up from $440 million in September.

“Equity outflows this month are mainly due to expectation of Federal Reserve’s tapering and a rate rise approaching soon,” said I-kuang Chen, Chairman at First Capital Management in Taipei. “The interest rate will determine where foreign investment will flow and it’s unlikely to flow back to Taiwan.”

Taiwan’s currency slumped to a six-month low earlier this month on equity losses after rallying to a 24-year high in June. That’s after Federal Reserve Chair Jerome Powell said in late September that the central bank could start scaling back asset purchases in November and rising inflation prompted traders to price in a rate hike as early as mid-2022.

While Taiwan has typically followed the Fed in raising rates, it may need to hold back if domestic growth weakens, which would weigh on the currency. The yield spread between Taiwan’s two-year bonds over similar-tenor Treasuries has widened to the most since March 2020.

Data on Friday is forecast to show the economy grew 4.05% in the third quarter versus 7.43% in the three months ended June, according to a Bloomberg survey.

However, a weaker currency could further boost the nation’s exports after orders climbed to a all-time high in September. It could also mitigate some of the risks stemming from the energy crunch that’s weighing on other manufacturers in the region.

Still, political risks could be a drag on the currency. Taiwan President Tsai Ing-Wen said on Oct. 10 the island is facing “unprecedented challenges” and will defend its sovereignty, pushing back after Chinese leader Xi Jinping declared a day earlier that unification will be achieved.

Royal Bank of Canada sees three factors signaling a correction in the Taiwan dollar in the next three to 12 months. “Relatively lower carry, overvaluation versus most other Asian currencies, and the expected decline in the exports boom as the rest of the world ‘normalizes’,” says Alvin Tan, head of Asia foreign-exchange strategy at Royal Bank of Canada in Hong Hong.