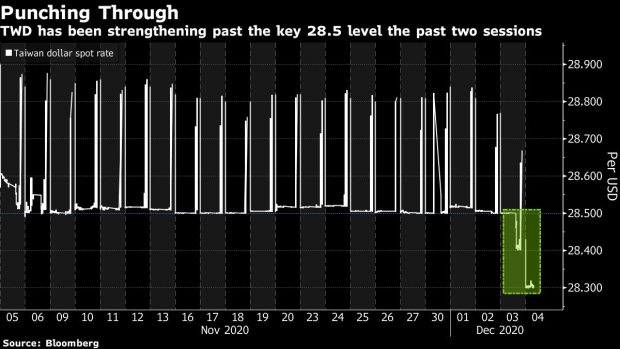 (Bloomberg) -- Currency traders are wondering what the next support level will be for the Taiwan dollar after the one that held for years crumbled.

The Taiwan dollar on Thursday charged past 28.5 versus the greenback to its strongest intraday level since 1997. On Friday morning, the local currency traded around 28.3, with two traders saying state-backed banks were buying U.S. dollars around that handle. The traders asked not to be identified commenting publicly on the market.

The 28.5 level carries special significance in Taiwan, where it is called the “Perng Fai-nan line” after the central bank governor from 1998 to 2018. Perng is credited with mostly keeping the currency from appreciating past that mark from the Asian Financial Crisis to his last day on the job, mostly to protect exporters.

Now traders are wondering where a new support under Perng’s successor and long-time deputy Yang Chin-long might form. The Taiwan dollar has rallied more than 5% this year through Thursday as the local economy proved resilient during the virus pandemic and benefited from companies bringing some of their manufacturing home from China amid friction between Washington and Beijing. One-month forwards on the Taiwan dollar are at a record low, signaling further gains ahead for the currency.

There are “very strong expectations” that Taiwan’s currency will advance, said Zhou Hao, senior emerging markets economist at Commerzbank AG. “It will be very difficult for there to be any significant retreat in the near term.”

The Taiwan dollar’s surge on Thursday came a day after Yang promised lawmakers he would provide more information about efforts to curb the currency’s advance.

From Nov. 6 to the day of that pledge, the Taiwan dollar saw intraday climbs capped at around the 28.5 level. Sharp sudden swings especially around the final half hour of trading would then wipe out the gains. Yang has referred to those types of moves as “smoothing,” and such intervention can draw the attention of the U.S. Treasury.

The Taiwan dollar was up 1.3% at 28.307 versus the greenback as of the midday trading break in Taipei.