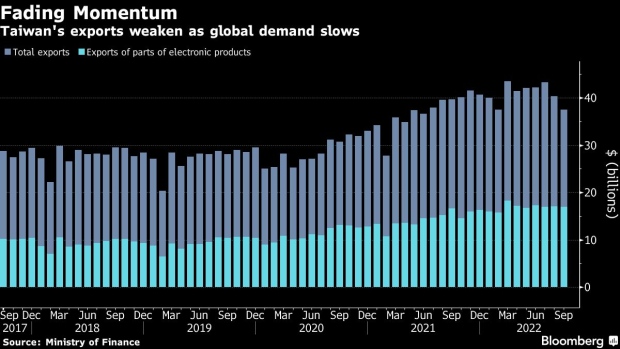 The Port of Keelung in Keelung, Taiwan, on Thursday, Aug. 4, 2022. China's military fired missiles into the sea as it kicked off three days of live-fire military exercises around the island in response to US House Speaker Nancy Pelosi's visit, even as Taipei played down the impact on flights and shipping. , Bloomberg

(Bloomberg) -- Taiwan’s exports contracted in September for the first time since 2020 as weakening demand from China and around the world brought to an end an era of unprecedented trade performance.

Overseas shipments dropped 5.3% in September compared to a year earlier, according to a statement from the Finance Ministry in Taipei on Friday.

That was the first drop in exports since June 2020, when the pandemic was in full swing and wreaking havoc on the world economy. It was the worst decline since January 2020.

Economists expected a 2.4% increase in September according to the median estimate in a Bloomberg survey.

“The cooling price of commodities and China real estate problems are dragging down the price and need for goods,” leading to Friday’s results, said Anita Hsu, an economist at Masterlink Securities Investment Advisory Corp. “It will only get worse from now on.”

Imports fell 2.4% in September, compared to a 3.5% increase in August. Economists had projected a 9.8% increase. That was also the first drop since 2020.

The main reason for the decline was “high global inflation, tightening monetary policy, and cooling consumer demand in China,” said Beatrice Tsai, the ministry’s chief statistician, at a press briefing with reporters in Taipei on Friday. The drop in exports was more severe than the warning officials gave last month of a decline by as much as 3%.

Taiwan authorities have been cautioning that exports are expected to slow through the end of the year. Global demand for many products has waned as inflation elsewhere skyrockets and several major economies face the prospect of a slowdown or recession. The need for electronic equipment used in remote work has also faded as people gradually return to the office.

Exports to partners including the US, UK, Singapore and Japan were all negative in September, but the pain was particularly acute in China and Hong Kong, where overseas shipments plunged more than 13% from a year ago.

Officials said Friday that they expect October exports to fall by as much as 6% year-on-year as trade continues to be challenged. In a statement, the finance ministry said export performance in the end of the year would be “highly pressured by slowing manufacturing activities around the world” due to rising interest rates and uncertainties caused by Russia’s invasion of Ukraine and the “US-China tech war.”

Read More: Taiwan Warns Exports to Struggle in Rest of 2022 as Demand Slows

“The tech sector’s impressive strong growth trend since the pandemic seems to have peaked, with Taiwan’s tech export orders falling about 13% from the recent peak” in the first quarter of this year, wrote Grace Ng, an economist at JPMorgan Chase & Co., in a research note earlier this week.

Taiwan’s not the only economy suffering from a slowdown in demand for chips and related products. South Korea, the hub of the world’s top memory chipmaker Samsung Electronics, saw its semiconductor output drop in August from a year earlier for the first time in more than four years. The country’s chip inventories also soared 67% as buyers hold off on more purchases, clouding the outlook of an industry that was still booming in the first half of 2022.

(Updates throughout with comments from the press conference, analyst commentary.)