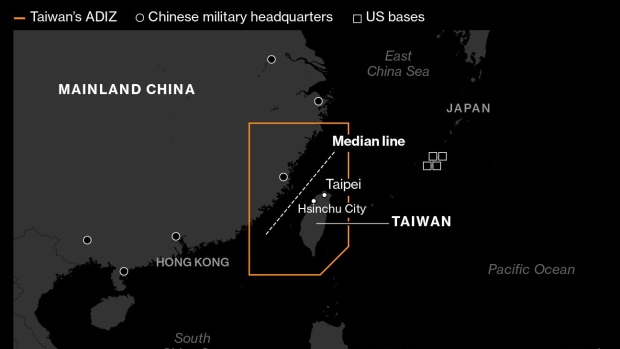 (Bloomberg) -- If any war were to break out between the US and China, one trigger may be the increasingly frequent fighter-jet encounters near Taiwan.

Almost every day, Taiwanese fighter pilots hop in their American-made F-16s to intercept Chinese warplanes screaming past their territory. The encounters probe the island’s defenses and force the pilots on both sides to avoid mistakes that could lead to a crisis that spins out of control.

“I didn’t know whether they would fire at me,” said retired Colonel Mountain Wang, recounting a tense five-minute confrontation he had with People’s Liberation Army jets more than a decade ago. “You have to be highly alert, and not lead to any accident with unintended consequences.”

The risk is even higher now, and not just because China is sending more jets with more experienced pilots ever closer to the main island of Taiwan. On Wednesday, China deployed 22 warplanes across the US-imposed median line over the Taiwan Strait, the most since Taiwan’s military began disclosing data in 2020.

The sorties were part of a flurry of military exercises that China held around Taiwan in response to US House Speaker Nancy Pelosi’s landmark trip to Taipei earlier this week. The PLA fired 11 missiles into waters near the island Thursday, the Taiwanese Defense Ministry said, as part of China’s most provocative exercises in decades.

But a longer-term problem for Taiwan’s military is its dire shortage of pilots. While Taipei is protected by a relatively large and modern fleet of fighter jets, the democratically governed island could need as many as 50 years at the current rate to train enough pilots to fill the cockpits of the jets they expect to get by the middle of this decade.

Taiwan might not have that kind of time. American military commanders estimate Chinese President Xi Jinping may have the capability to take action across the Taiwan Strait in as soon as five years, and the daily incursions are wearing down Taiwan’s pilots and the jets they fly.

The shortage illustrates the limits of Taipei’s reliance on purchases of US military hardware to deter the threat of invasion by Beijing, which claims the island as its own territory. Taiwan will need to add at least 100 more pilots by 2026 to operate the 66 more advanced Lockheed Martin Corp. F-16Vs that President Tsai Ing-wen agreed to buy two years ago.

“Taiwan has put a lot of emphasis on military preparation,” said Jang Chyi-lu, a TPP lawmaker. “A bigger problem, though, is who can fly the planes?”

Ukraine’s own monthslong struggle to turn back Russia’s invasion has highlighted the challenge facing Taiwan’s strategic planners. Although Kyiv has received a huge influx of Western-made military hardware, it has also benefited from having a large reserve of relatively well-trained military personnel.

Taiwan’s effort to attract and train more pilots has been thwarted by a series of factors, from the island’s declining birth rate to several high-profile crashes. About 80% of university students in Taiwan have myopia, due to long classroom hours and high-levels of screen time on electronic devices.

Taiwanese authorities say Ukraine’s success in denying air superiority to a much larger invading power has helped recruiting. In March, 70% of 1,076 people polled by the Taiwan International Strategic Study Society said they were willing to go to war to defend their self-governed island from Beijing’s attack, up from 40% in December.

Chiang Ming-chun, 18, said he was determined to be an Air Force pilot despite concerns about the safety risks and increased tensions with China.

“They asked me why not pick army or navy, why does it have to be Air Force? I just told my parents it is my ambition,” said Chiang, who will be a freshman at the Air Force Academy this year. “If I don’t do it now, I’ll regret why I didn’t chase my dream.”

That renewed determination to sign up was evident last month at the Seventh Flight Training Wing on the Chihhang Air Base in eastern Taitung city. The base, located on the Pacific coast, will house the new F-16Vs, as well as 33 locally developed “Brave Eagle” advanced jet trainers by 2024.

Matt Shen, an instructor at the facility, said the release of “Top Gun: Maverick” — in which Tom Cruise can be seen sporting a Taiwanese flag patch on his jacket — has also driven new applicant interest.

“We think recruiting should be easier in the next two years because Top Gun is so popular,” Shen said, adding, “Many young men dream of flying.”

More than half of the 70-80 trainees annually at the center are now being sent to the F-16 wing, Shen said, compared with one-third a few years ago due to an effort to deal with China’s increased military activity.

PLA aircraft made some 960 forays into Taiwan’s air-defense identification zone last year, compared with about 380 in 2020, according to Taiwanese Defense Ministry data. Such encounters aren’t just shows of power: Forcing Taiwan to drive away warplanes delays its ability to train new fighter pilots, depleting the island’s capacity to respond in a real conflict.

The Air Force acknowledged in a statement that the pressure from China was “severe,” but said its capacity to respond had “never slackened.” “The Air Force is actively increasing recruits, raising the distribution ratio of pilots to F-16 fleet and enhancing staff’s willingness to stay, and these measures are able to satisfy demands for future pilots,” the Air Force said.

Flying schools have begun accepting trainees with lower academic grades to ensure they get more candidates who meet both the physical fitness and vision requirements. The Air Force has also made it easier for them to sign up in recent years, relaxing rules requiring 20-20 vision and offering corrective eye surgery to some.

Moreover, the busy schedule prevents experienced pilots from helping to train new ones. Taiwan requires 250 hours of flight training before a pilot can fly a fighter jet like the F-16.

The Taiwanese military has also seen four air crashes this year, including a fatal one involving an F-16 in January. In May, an Air Force trainer jet also crashed, killing its pilot.

Chang Yan-ting, a former vice chief commander of the Air Force, said that “insufficient training” was a contributing factor to such incidents. “The crashes we have seen in Air Force in the past few years were just the tip of the iceberg, and the situation is expected to get worse in future,” Chang said.

Still, Shen, the pilot instructor, said his own son also plans to become an Air Force pilot. He’s not deterred that his son is signing up despite the growing risk of a dangerous close encounter with a Chinese warplane.

“I encourage him to do so,” Shen said. “I’m not worried about death. Who can avoid death if a war breaks out? We are at the front line, and it’s our mission to guard the country.”