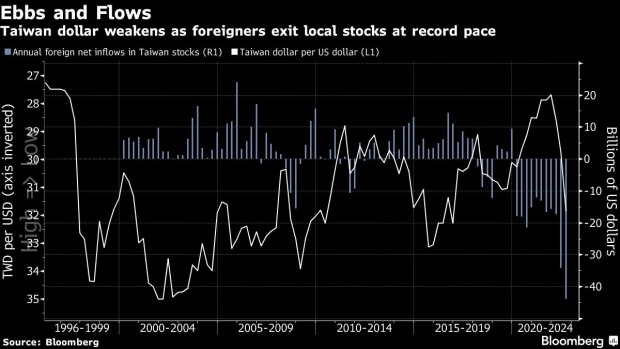 Taiwan will closely monitor foreign outflows before considering control measures in case of significant foreign outflows due to US rate hikes or cross-strait tensions, central bank governor Yang Chin-long said in response to a question from lawmakers. Outflows are so far under control, he said. The government is cautiously considering a ban on short-selling, Taiwan’s Financial Supervisory Commission Chairperson Huang Tien-mu said.

The remarks followed Taiwan dollar’s drop to the weakest since 2017 on Monday. Pressure on the currency is rising after global funds sold more than $43 billion of Taiwan stocks this year to put the market on course for its biggest ever annual outflow. Taiwan’s tech-heavy equity benchmark Taiex Index has plunged more than 24% this year, to be among the worst-performing Asian markets.

Adopting FX controls “would be a more effective way of supporting the currency,” said Stephen Chiu, chief Asia FX & rates strategist at Bloomberg Intelligence in Hong Kong. Even the major economies may have to take this route if the greenback strength continues, he added.

Dollar strength has roiled global currency markets. The British pound slid to a record low on Monday, while the Bank of Japan intervened to support the yen for the first time since 1998 last week as the currency fell past 145 per dollar. The yuan is near its lowest level in 14 years.

Foreign outflows so far are under control and Taiwan has more than $500 billion in forex reserves, the island’s central bank governor said.