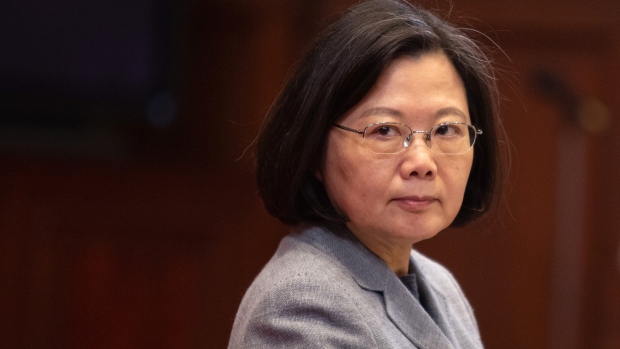 Tsai Ing-wen, Taiwan's president, looks on during a news conference at the Presidential Palace in Taipei, Taiwan, on Saturday, Jan. 5, 2019. , Ashley Pon/Bloomberg

Taiwan’s ruling party forced through a landmark marriage-equality law in the face of staunch local opposition Friday, making it the first place in Asia to legalize same-sex unions.

Lawmakers from President Tsai Ing-wen’s Democratic Progressive Party voted in favor of the bill drafted by Taiwan’s cabinet, rather than two rival proposals that would have limited rights and protections for same-sex couples. The law is the first such formal legislation in Asia.

Tsai praised the vote in a tweet Friday. “On May 17th, 2019 in #Taiwan, #LoveWon,” she said. “We took a big step towards true equality, and made Taiwan a better country.”

Tens of thousands of LGBT rights advocates gathered outside the legislature in Taipei Friday calling for the law’s passage. The Marriage Equality Coalition Taiwan, a gay rights alliance, put the number at 40,000.

Eight months ahead of Taiwan’s presidential election, deliberations over gay marriage had laid bare its societal divisions, as typically young urban progressives came out in favor of the measure while religious groups and older voters opposed it.

The outcome could have long-lasting consequences for Tsai, who faces an uphill battle for re-election -- even from within her own party.

“I’ve never seen a bill so controversial here,” DPP caucus leader Ker Chien-ming said in an interview on Thursday. “You can use scientific evidence to debate other types of legislation but this bill touches upon people’s religion, values and beliefs.”

Widespread public opposition to gay marriage, including by DPP supporters, presents Tsai with a dilemma. More than 72% of people voted in favor of keeping restrictions on marriage rights to heterosexual couples in a November referendum.

Tsai signaled her support for the LGBT community before becoming president in 2016. But since then, she has remained largely silent on the issue, preferring to allow the courts and the legislature to take the lead on enacting marriage equality.

Elsewhere in the wider Asia-Pacific region, Australia legalized same-sex marriage in December 2017, and has since held thousands of gay weddings. It’s been legal in neighboring New Zealand since 2013.

The constitutional court ruled in May 2017 that language in Taiwan’s Civil Code restricting marriage to a man and a woman was unconstitutional, and set a two-year deadline for the legislature to pass regulations governing same sex marriages.

Conservative lawmakers had submitted two competing bills, which only referred to “same-sex cohabitation partnerships” or “same-sex unions” rather than “marriages.” The government’s bill grants gay couples the right to “register to marry.”

Tai Lee, a 54-year-old Taipei resident, said he joined Friday’s rally to show support for his stepson’s right to marry. “The government’s version of the act is compromised. It’s not an ideal version but we can accept it for the moment,” he said. “Many other countries have something like this as a first step.”

Regardless of whether the legislature had passed regulations codifying gay partnerships on Friday, same-sex couples would have had the right to marry later this month anyway as the court’s 2017 ruling rendered legal obstacles to the unions unconstitutional.

More than 200 same-sex couples have registered to marry on May 24, the Taipei-based Apple Daily reported.

The importance of the impending deadline was not lost on the ruling party. “Taiwan can’t afford the possible chaos if we don’t have legislation in place to govern the civic relations between same-sex couples,” Ker said.