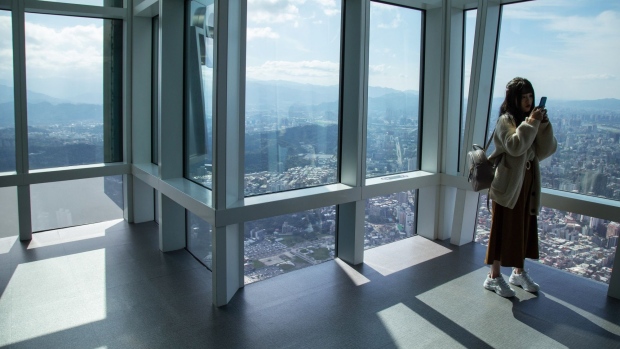 A woman takes a photograph on the observation deck of the Taipei 101 building in Taipei, Taiwan on Sunday, Jan. 5, 2020. Investor sentiment toward Taiwan has rarely been this good, with only days to go before its first presidential election in four years. Photographer: Betsy Joles/Bloomberg , Bloomberg

(Bloomberg) -- A dramatic plunge in Taiwan’s $2 trillion stock market triggered a rush of activity in the options market on Wednesday.

Derivatives volume exploded in Taipei as the Taiex sank through the key 16,000 point level just after 10:40 a.m. local time. More than 1.6 million contracts changed hands as dozens of short-term options expired on Wednesday. The price of one bearish put surged as much as 7,757%.

As losses began to accelerate, forced selling by leveraged retail investors exacerbated the declines. Margin debt in Taiwan’s stock market had almost doubled in six months to about NT$260 billion ($9.3 billion) by the end of April, the highest level since 2011. Soon the index was in freefall. At its worst, the Taiex was down 8.6%. That’s the most on record, although comparing moves before 2015 is warped by wider limits on individual stock moves.

There was no single trigger for the plunge, with trading activity muted even an hour after the market opened. But traders pointed to concerns about a worsening outbreak of Covid-19 on the island, which has so far evaded any sizable spread of the virus. This week’s selloff in global tech stocks added to jitters.

As the Taiex sank 3.8% on Tuesday, the level of margin debt fell by NT$12.6 billion, the most since October 2018. That suggests traders faced margin calls by brokers to cover losses in their stock accounts. Wednesday’s rout is likely to have spurred a bigger unwinding of leverage.