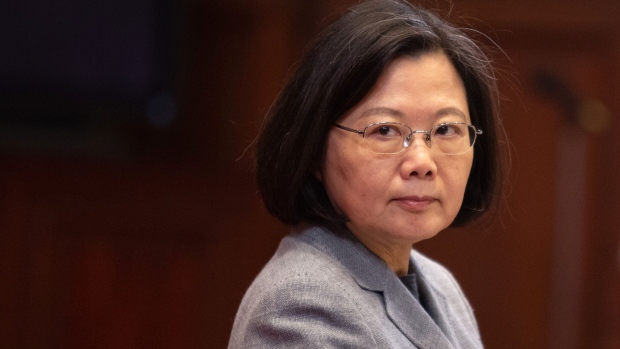 Tsai Ing-wen, Taiwan's president, looks on during a news conference at the Presidential Palace in Taipei, Taiwan, on Saturday, Jan. 5, 2019. , Bloomberg

President Tsai Ing-wen said in her National Day address Thursday that Taiwan faced “unprecedented change” in the world and vowed to fight for its survival, amid a threat from Beijing that has included recent efforts to isolate Taipei diplomatically.

Coming three months before Taiwanese voters go to the polls, the multiple battles Beijing is fighting -- from halting broadcasts of some U.S. National Basketball Association games to a protracted trade war with President Donald Trump and pro-democracy protests in Hong Kong -- appear to be boosting Tsai’s hopes of re-election in January.

Tsai enjoys a more then 13 percentage-point lead over her main rival, Han Kuo-yu of the opposition Kuomintang, according to a poll published in the Apple Daily newspaper Tuesday.

Lured by China’s Cash, Tiny Pacific Islands Give Up on Taiwan

Taiwan has been one of the strongest sources of overseas support for the Hong Kong protesters, amid growing international condemnation of aggressive tactics used by leader Carrie Lam’s Beijing-backed government.

Beijing’s success in persuading two of Taiwan’s diplomatic allies to switch recognition to Beijing in the last month -- the Solomon Islands and Kiribati -- leaves Taipei with just 15 such partners worldwide.

But it also threatens to backfire as Taiwan’s presidential election draws closer, with U.S. and Australian concerns about China’s growing footprint in the Pacific strengthening Tsai’s argument that Beijing poses a threat to Taiwan and regional order.

While the People’s Republic has never controlled Taiwan, it claims the separately ruled island as part of its territory, a claim Tsai’s Democratic Progressive Party rejects.

To contact the editors responsible for this story: Brendan Scott at bscott66@bloomberg.net, Karen Leigh, Shamim Adam