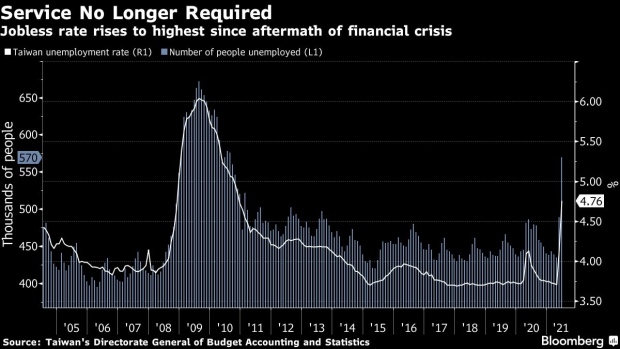 An employee wearing a protective mask sits at an entrance to a hotel in Taipei, Taiwan, on Wednesday, June 3, 2021. Taiwan’s ruling party said it plans to double a proposed increase in stimulus funding as the economy reels from tightening virus restrictions across the island. Photographer: Billy H.C. Kwok/Bloomberg , Bloomberg

(Bloomberg) -- Unemployment in Taiwan surged in June as companies in the service sector and their workers bore the brunt of the government measures aimed at slowing the spread of the Covid-19 outbreak.

The unemployment rate jumped to 4.76%, the highest since November 2010 and well above the 4.25% median forecast in a Bloomberg survey of economists. A record 81,000 people joined the ranks of the unemployed in June, the largest month-on-month increase since the government began collecting data in 1978.

Workers in the service sector were hardest hit due to the coronavirus outbreak, according to a government statement. In May, health authorities shut all entertainment and recreation facilities, such as bars, gyms and tourist attractions, as part of their efforts to rein in Taiwan’s worst Covid outbreak.

Restaurants have also been hit as officials barred them from accepting dine-in customers. Department stores have seen sales fall by around 60%, according to First Capital Management economist Liu Cheng-yu, as shoppers have largely stayed at home.

Even those who have managed to hold on to their jobs haven’t escaped the impact, with employers cutting back working hours, according to the government’s statement.

The government has sought to ease the economic strain on companies by providing one-off subsidies of NT$40,000 ($1,428) per employee for firms that have lost more than half their revenue. The central bank is also offering low-interest loans to medium and small-sized enterprises.

The cabinet is deliberating an additional round of relief measures, spokesman Lo Ping-cheng said Thursday. In May lawmakers doubled the amount of stimulus available to cushion the economy from the pandemic to NT$840 billion. Much of that has already been spent or earmarked, but the government still has NT$160 billion of that available for additional measures.