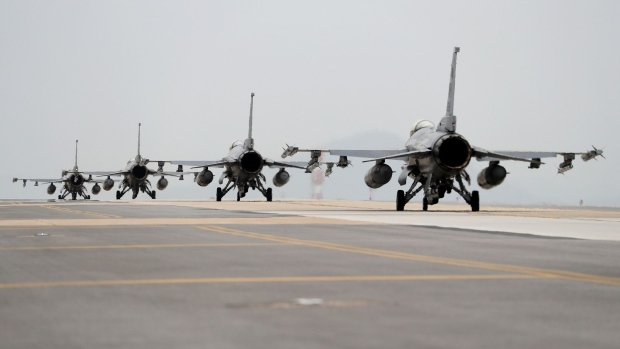 (Bloomberg) -- Taiwan has signaled to U.S. officials that it will move swiftly to complete the purchase of 66 new F-16 fighters once congressional foreign relations committees complete their review this month, according to a State Department official.

The department formally notified Congress on Aug. 20 that it approved the sale, which includes munitions, defensive electronics and a top-of-the line fire-control radar that would allow precision-guided missiles and bombs to be launched from greater distances.

Once the Taiwan deal is approved by Congress -- and there’s been no sign it will be blocked -- Taiwan must submit a formal Letter of Offer and Acceptance that gets translated into a signed contract with delivery dates.

“According to our counterparts in Taiwan and the Taiwan representative’s office” in the U.S. “they anticipate a quick move on their part” to finish the F-16 deal, Assistant Secretary of State Clarke Cooper, who heads State’s Bureau of Political-Military Affairs, said in an interview. “If we are talking about the F-16s” alone “then the indicators are that’s a relatively quick turnaround from Taipei,” he said.

China, which considers Taiwan part of its territory, has strongly objected to sale of the jets built by Lockheed Martin Corp. A spokeswoman for China’s Foreign Ministry, Hua Chungying, said last month that if U.S. arms sales aren’t stopped “the Chinese side will surely make strong reactions, and the U.S. will have to bear all the consequences.”

Congress has already approved a separate potential transaction for $2 billion to sell Taiwan 108 M1A2 Abrams tanks, but no contracts have been announced for that deal.

“With every partner, we’re always looking at not only at their security requirements, we are looking at how they address it at home” in terms of budgets, Cooper said in an interview Thursday after a breakfast meeting with reporters.

Negotiating a contract sometimes takes months and doesn’t always result in a sale.

But Taiwan’s cabinet this month approved a special budget bill for the F-16 purchases, its Ministry of National Defense said Sept. 4, so the U.S. approval process is in sync with Taiwan’s budget cycle.

The U.S., previously wary of antagonizing China, hasn’t sold advanced fighter jets to Taiwan since President George H.W. Bush announced the sale of 150 F-16s in 1992. The Obama administration rejected a similar Taiwanese request for new jets but agreed to update its exiting fleet.

Even if Taiwan moves quickly to complete the F-16 deal, there’s a question as to how soon they can be delivered. Taiwan would be the fourth customer for the latest model of Lockheed’s iconic fighter, called the Block 70. They are being assembled at the contractor’s new facility in Greenville, South Carolina, which opened in April.

The first Block 70 jets are scheduled to roll off the Greenville line in late 2021, bound for Bahrain. Slovakia and Bulgaria are the other customers with orders.

It takes 36 to 39 months for the first aircraft to be delivered after a contract is signed, depending on customer requirements, according to Lockheed data.

To contact the reporter on this story: Tony Capaccio in Washington at acapaccio@bloomberg.net

To contact the editors responsible for this story: Bill Faries at wfaries@bloomberg.net, Larry Liebert, Steve Geimann