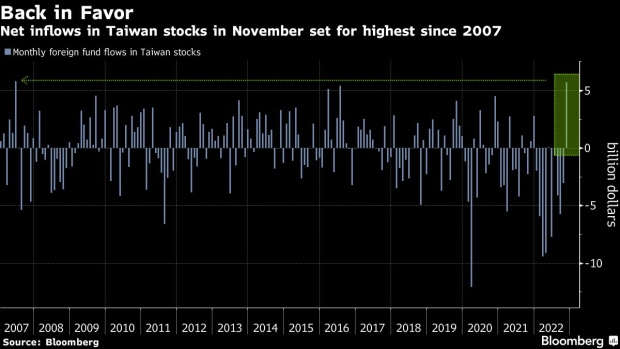 Vehicles travel along a road in Taipei, Taiwan, on Tuesday, Aug. 2, 2022. The White House sought to dial back rising tensions with China over House Speaker Nancy Pelosi’s expected visit to Taiwan, insisting the trip doesn’t signal a change in US posture toward the island and urging Beijing to refrain from an aggressive response. Photographer: Lam Yik Fei/Bloomberg , Bloomberg

(Bloomberg) -- Foreign investors are quietly piling back into the Taiwanese market, as expectations of slower global interest rate increases drove the benchmark gauge to one of this month’s best performers in the region.

The stock rebound and influx of foreign capital come ahead of local elections on Saturday, with polls serving as a show of confidence in the ruling Democratic Progressive Party ahead of a presidential vote in 2024.

November’s net inflows into the island’s stocks reached $5.73 billion as of Thursday, set for the first positive figure in six months and the most since June 2007, according to Bloomberg-compiled data.

More market watchers are calling an end to the semiconductor downcycle by mid-2023 amid enticing valuations. That, alongside a potential pivot by the Federal Reserve and easing geopolitical tensions after the meeting between China’s President Xi Jinping and his US counterpart Joe Biden, has helped the rebound in Taiwanese stocks.

The Taiex Index is up 14% so far this month, set for its best in more than 13 years, with index heavyweight Taiwan Semiconductor Manufacturing Co. advancing 27%. The shifting sentiment has also lifted the Taiwanese dollar from its weakest level since 2016, with the currency jumping more than 4% in November to head for its strongest monthly gains since 1998.

Taiwan’s stocks are primed to advance further once the election overhang is removed, according to Angela Chuang, a fund manager at Capital Investment Trust Corp. “Past records show that the Taiex rose by 10% on average one month after local elections. So I think no matter which party wins, Taiwanese stocks will get a boost.”

Taiwanese stocks suffered a massive selloff this year amid a global technology stock rout and rising political tensions with China. The Taiex Index is still down 19% this year, with net selling of $41.9 billion worth of stocks by foreigners set to be the most on record.

The outlook is more positive in the traditionally strong month of December, as “companies are buying back shares to boost their portfolios for year-end window-dressing,” said Ares Chou, a fund manager at Franklin Templeton SinoAm Securities Investment Management Inc.

--With assistance from Jeffrey Hernandez and Chester Yung.