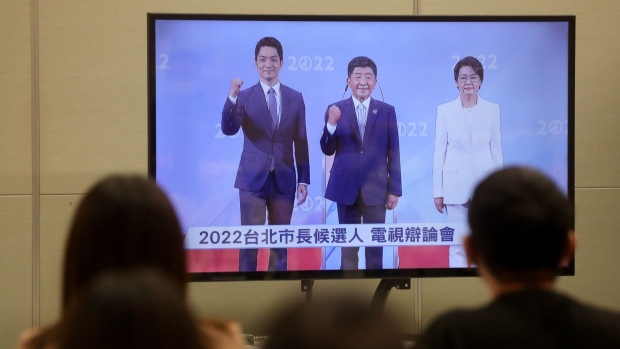 (Bloomberg) -- Taiwan held local elections Saturday that could shape the race to replace the island’s China-skeptic president, Tsai Ing-wen, in little more than a year.

Taiwanese voters were choosing leaders of 21 counties and cities amid simmering tensions between the US and China over the democratically ruled island’s autonomy. Locales holding elections include the capital Taipei -- a city of 2.5 million, whose past mayors have gone on to run for president -- and the southern port of Kaohsiung.

Polls closed at 4 p.m., and results will trickle in over the next few hours.

The elections represent the last major test of Tsai’s Democratic Progressive Party before her second and final term as president draws to a close and Taiwan picks a successor in early 2024. The opposition Kuomintang, or Nationalist Party, is hoping that gains in local races would help it mount a comeback after back-to-back defeats in presidential elections in 2016 and 2020.

The result will be closely watched in Washington and Beijing, since the DPP’s rise to power has prompted China to cut off communications with Taiwan and ramp up diplomatic and military pressure on the island. The KMT, which favors eventual unification with China, had previously overseen a historic expansion of ties with Beijing, easing travel, trade and investment across the Taiwan Strait.

The elections will have “significant implications” for the parties and personalities before the next presidential race, said Ava Shen, an associate at the Eurasia Group Ltd., a New York-based risk consultant.

“A strong KMT showing would reassure Beijing but could force Tsai to resign as DPP chair and diminish her moderating influence on pro-independence factions before 2024,” Shen said. “A strong DPP showing could enhance its willingness to confront Beijing.”

Foreign investors piled back into Taiwan’s market ahead of the election, as relations between the US and China show signs of improvement. November’s net inflows into the island’s stocks reached $5.78 billion as of Friday, set for the first positive figure in six months and the most since June 2007, according to Bloomberg-compiled data.

Voters are also considering the outlook for the economy, which has held up this year as an easing in virus restrictions helped to spur spending and offset sliding global demand for its exports. Gross domestic product expanded 4.1% in the third quarter from a year earlier, higher than economists expected.

Yet worries about the end of 2022 are mounting. Exports dropped for a second straight month in October and officials have warned that overseas shipments for November are expected to fall between 5% and 8%.

KMT Chairman Eric Chu hopes to add to the 14 mayor and county leader positions the party now holds, compared to the DPP’s seven. DPP mayors run three of the six biggest cities, versus the KMT’s two -- an edge it’ll seek to defend.

Shih Cheng-feng, a professor of politics at National Dong Hwa University, said mayoral races for Taipei, Taoyuan and Hsinchu City would be key, describing them as “the decisive battle” in the broader contest between Taiwan’s two main political parties. That said, Tsai recovered from a defeats in local elections in 2018, only to win re-election by a wide margin little more than a year later.

In Taipei, the KMT is running Chiang Wan-an, the great-grandson of late Nationalist leader Chiang Kai-shek, who fought and lost a civil war against Mao Zedong’s Communists and is remembered by many Taiwanese for his repression. Chiang has promised to address the capital’s aging infrastructure and shrinking population, and benefits from public criticism of DPP candidate Chen Shih-chung’s tenure as health minister.

Taiwan’s early success reining in Covid-19 has been overshadowed by a late spike in cases, dozens of deaths every day and criticism over vaccine shortages. In a Nov. 5 mayoral debate with Chiang, Chen apologized for the loss of life by saying: “I wanted to protect everyone. I’ve sorry that I failed, I’m sorry for your suffering.”

Voters will decide on a referendum to lower the voting age to 18 from 20. The Central Election Commission said this is the first civil referendum in the island’s history, and that it would require the backing half of registered voters -- or some 9.6 million people -- to pass.

The winners of Saturday’s elections will have a say in who get picked to in the subsequent presidential elections, Lev Nachman, an assistant professor of political science at National Chengchi University in Taiwan, told Bloomberg Television.

“Even though these seats themselves might not be particularly dire for international relations, the implications of these local elections still have something to say about the next major national election here in Taiwan,” Nachman said.