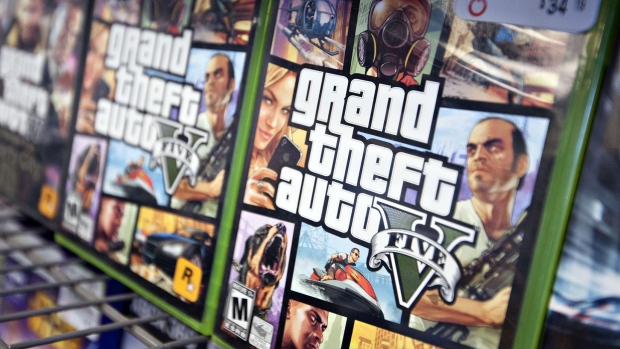 Take-Two Interactive Software Inc. gained in late trading after fourth-quarter earnings topped analysts’ estimates, boosted by games such as NBA 2K22, though a forecast for the coming year suggests that an industrywide slump is poised to crimp sales.

The shares climbed as much as 4.3 per cent after Take-Two posted earnings of US$1.09 a share, excluding some items. That compared with an average projection of 99 cents. The stock had been down 38 per cent this year through Monday’s close.

Revenue in the coming year will be US$3.75 billion to US$3.85 billion, with earnings of as much as US$4.45 a share, Take-Two said. Both would be short of analyst projections.

The video-game industry is getting punished by widespread hardware shortages and inflation -- as well as users spending less time playing games than they did during the height of the pandemic. Consumer spending on video games in the U.S. from January through March dropped 8 per cent from the same period last year, according to the research firm NPD Group.

Take-Two is the parent company of several video-game labels, including Rockstar Games and 2K. Its biggest hits include the NBA 2K series and Grand Theft Auto V, which has sold more than 160 million copies and is one of the most lucrative properties in entertainment history.

Game delays at a number of publishers have taken a recent toll on video-game sales. Take-Two said Monday that one of its smaller titles, Kerbal Space Program 2, will be pushed back until 2023. That game went through turmoil in 2020 after Take-Two cut ties with the company that was working on it. Take-Two poached about a third of the game developer’s staff, and the business -- Star Theory Games -- ultimately closed its doors.

Take-Two is a participant in this year’s wave of consolidation, announcing in January that it plans to buy the mobile-game company Zynga for US$11 billion. Analysts are watching to see if Take-Two will make other moves, such as a possible takeover of Ubisoft Entertainment SA, which is rumored to be on the market. Analysts are also looking for more news on the next Grand Theft Auto, which Take-Two said earlier this year was in development at Rockstar Games.

Take-Two posted fourth-quarter revenue of US$845.8 million, missing the average estimate of US$870.1 million.

Adjusted revenue for the fiscal first quarter, which runs from April to June, will be US$700 million to US$750 million. Analysts had estimated US$788.1 million. The company forecast earnings of 60 cents to 70 cents a share, compared with an average analyst estimate of 96 cents.

Chief Executive Officer Strauss Zelnick summed up the year by saying Take-Two took “pivotal steps” to invest in talent, broaden its product lineup and agree to a “transformational pending combination with Zynga.”