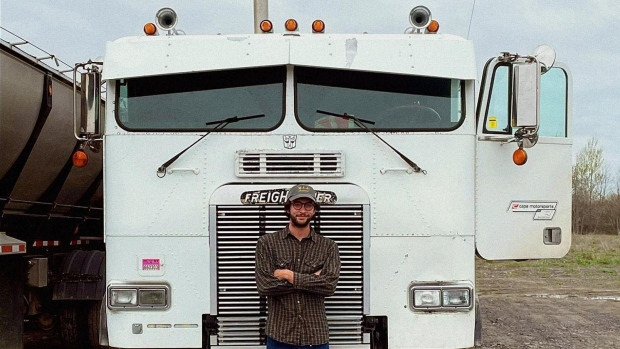 Watson McGlashan is seen standing in front of his truck , (Submitted)

He’s shoved it under a rug just tightly enough not to remember it. So, recalling it now is a memory that hurts Dwayne Degenstein all over again — like a debilitating wound he never healed from, but rather learnt to live with.

It was the early days of the pandemic and the 42-year-old trucker from Calgary was on the road.

“I remember feeling stranded,” Degenstein said. “All the stops you could think of weren’t accommodating us anymore. There were no washrooms, no showers, no open places to eat a hot meal; and maybe, perhaps if we’re lucky after more than 12 hours at work, a porta-potty was on the side of the road for us.”

In those moments, all he could do was try to get used to it, calling it a “new normal” or anything as such to keep doing his job so he could keep paying his bills.

Degenstein’s memory of that time is not an isolated incident.

In recent interviews with BNN Bloomberg, more than a dozen truckers and transportation workers across Canada said they’ve been through the same.

For some, it's an occurrence that continues to happen. And for others, it's been worse, among a sea of problems they believe are only getting more dire — without governments, managements or any such authorities paying attention, they said.

These are the voices from the frontlines of the supply chain concerns that have spiralled globally — causing breakneck deadlines in an already frenzied sector, with expectations that keep rising for transporters despite stalled wages and declining work conditions.

No wonder, many of them said, there is an unprecedented labour shortage for truckers in Canada.

BNN Bloomberg is waiting on comment from the federal government, several departments from which have not yet responded after multiple requests.

“I got into this career after being a trained and registered nurse for nearly 15 years,” Degenstein said in an interview, while on a rare night off after what seemed like an eternity.

At the time he made the switch, it was better money than his nursing shifts. “In fairness, it still is,” he said. But Degenstein now spends more days wondering whether all those extra hours without any breaks and dire conditions are worth it anymore.

“You’re put through a horrible ringer even without all those pandemic circumstances attached,” he said. “An average day could look like 14 hours at least… Just imagine yourself basically living in a truck. It’s brutal.”

Phillip Adler, a trucker in his 20s who lives in rural Manitoba, scoffs at the idea of any work-life balance.

“Even if some companies did give you decent times with your family when you aren’t working on the road, all of that went out the window when the pandemic happened,” he said. “All anyone cares about is whether you get the delivery done on time. There’s just no respect for us.”

Sergio Machado said some of his peers have even been placed in situations where their vehicles are camera-monitored to make sure they don’t use hands-free devices, or do anything else that managers believe will delay deliveries.

“As if somehow too much music or a safe call to pass the time will delay our work,” said the 52-year-old from Edmonton.

Machado has witnessed delays on the U.S. border as well, but found himself and his peers being blamed for that. “Drivers are micromanaged, but anything can happen at the border during COVID, with that stress passed down to us,” he said.

“And what happens if you didn’t have a good night’s sleep? Doesn’t matter. You still have to get things done.”

That’s why many truckers become owner-operators instead of working for large or medium-sized companies. However, the insurance and onboarding costs to do so are rarely affordable for most people.

“The expectations have been the same — they’ve always been gruesome and cumbersome, but the pandemic just exposed the problem,” Machado said. “Personally, I can’t afford to take a day off, so I have to come into work day in and day out, whether I’m sick or not.”

The shortage of truckers in Canada is disrupting supply chains, exacerbated by the pandemic. From fatigue to low pay and lack of service facilities for long-haul drivers, Sergio Machado of Service SMachado Inc. tells BNN Bloomberg that authorities need to address the working condition of truckers to solve supply chain troubles.

Adler, who has chosen not to get the COVID-19 vaccine, said there’s also a particular stigma against drivers like him.

“I don’t have a problem with putting on a mask or anything like that. But if you don’t feel comfortable with the vaccine like me, you can’t sit in restaurants, you can’t sleep in beds, you can’t even go to the toilets,” he said.

Degenstein, who is fully vaccinated however, said while he believes everyone should get the jab, it is a personal choice that should not be the cause of someone’s basic rights being stripped away.

“To be frank, this is probably the most COVID-safe thing there is because you’re constantly solitary,” he said. “Besides, it’s a shame if we lose the few people we have in the industry over something like this.”

According to a new report from Trucking HR Canada, an average of 18,000 jobs needed to be filled in the second quarter of 2021 across the country.

That’s three very busy months — April, May and June — for jobs in the transportation industry that no one took up.

Machado said it’s because there really is no other incentive being provided to potential recruits “other than you should do it if you love being on the road.” Simultaneously, he added, there is a lack of loyalty from drivers due to a lack of appreciation.

“Let’s put it this way: We’re considered essential, but no one is supporting us in Canada,” he said. “There’s no bonuses, upon signing on or otherwise. And some companies are paying less than 50 cents a mile.”

On the flipside, things are much better in the U.S., Machado said. “I could be making tons more in Texas with actual signing bonuses. Maybe that’s why so many people choose to go there instead,” he added.

Numbers from Statistics Canada in 2019 show that only between seven and nine per cent of truck drivers are women. That number is even lower when considering women of colour or factoring in Black, Indigenous and other people of colour who are workers in the industry.

It’s a widespread problem, said Carol Lariviere, a trucker in her 50s who lives in Alberta.

“This is a hard job and we risk our lives every day out here,” said Lariviere. “There is little respect or reward for that. The pandemic made the job even harder, but at least we were working.

“The expectation of truckers and what's demanded of this job changed 30 years ago. It’s much worse now. Ridiculous timeframes and appointment times, even when there's a snowstorm.”

Josh Aldrich, a 38-year-old who lives in a small town in British Columbia, pulled over on his way to Calgary to chat with BNN Bloomberg.

He said it’s not uncommon now to make at least eight to ten stops per drive for every trucker.

“That wouldn’t be OK even if we did have no constructions on our roads and highways,” Aldrich said. “But we do. And it takes about two or three more hours almost every time because of that — let alone the stops themselves.”

The supply chain disruption has been revealed from the manufacturing side quite well, Aldrich added, using chip shortages and the notorious toilet paper shortages as an example.

“But what I would like to tell you is about how much of a ripple effect that has on us and how manufacturers can get away with it, while we can’t,” he said. “We have way too few drivers now who are the ones that get blamed when things aren’t on time.”

Watson McGlashan’s family has been in the construction and aggregate industry for generations.

“Within my section of the industry, we’ve certainly faced a lot of rising costs along with materials we haul, but with rates not keeping up — making the margins of profit difficult to keep up with,” the 27-year-old from Ottawa said.

“Historically the industry has made no room for independent owners to flourish, so not only is that an increasing issue but also the lack of those able to work for bigger companies.”

And then there’s the extreme climate events like wildfires. “Who do you think gets those emergency items delivered in that situation? We do,” said Aldrich.

“Every single thing you have seen — from the toothpick in your hand to the toilet paper you buy on shelves — has sat in the back of a truck. But when it comes to how regular people treat us on the road by overtaking us and speeding around us or flipping us off in general, we’re seen like the very toilet paper you use to wipe yourself.”

SOLUTIONS? ‘ONLY IN THEORY AND TALK’

Steve Roach is skeptical there will ever be any solutions for these problems.

The 38-year-old trucker from Edmonton is hesitant to even bring any ideas up, because he hasn’t heard a single person listen to his concerns or those from his colleagues in the 15 years he’s worked within the sector.

“There’s no legitimate union or anyone to file a grievance to,” he said. “And the associations that do exist are trying their best, but I don’t ever remember that leading to anything. So how about we start there? Have someone just literally talk to us.”

Throwing money at the problem is one thing, but that isn’t happening either, said Roach.

Other solutions can include creating incentives, loyalty programs and “simply calling it what it is: trucking is a skilled trade like any other, and as such should be treated that way with the respect you would give to them,” Roach said.

“But all these things are only in theory and talk. I don’t know if they’ll ever work.”

For now, Roach is just looking forward to being home again. Still, he’s already worried about the next worry.

“When you do get burned out and finally go home for a few days, by the time your body and mind recovers, it's time to go back and do it again,” he said. “The phone just doesn't stop ringing and it never ends.”