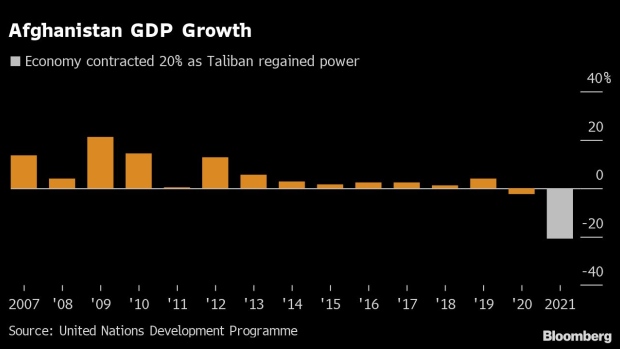 (Bloomberg) -- The Taliban’s failure to break its international isolation since seizing power overnight last year has plunged Afghanistan into a humanitarian crisis, with little prospect of aid for a crumbling economy.

The United Nations General Assembly earlier this month voiced “deep concern over the volatility in Afghanistan since the takeover of the Taliban in 2021, and the persistent violence and presence of terrorist groups as well as abuse of human rights, including those of women, girls and minorities.”

The militant group has limited diplomatic links with only seven countries, including Russia and China, but even those countries have not formally recognized its government.

“An isolated Taliban regime has a direct impact on the country’s economy,” said Madiha Afzal, a fellow in the foreign policy program at Brookings. “Beyond its frozen foreign reserves, it also finds itself unable to get development aid, something the previous Afghan government was heavily reliant on.”

Global aid and funding account for 40% of Afghanistan’s gross domestic product. The worst drought in decades and the Covid-19 pandemic have added to the economic free-fall.

Pakistan, Turkmenistan, Iran and Turkey and Qatar are the other countries that have maintained embassies or consulates in Kabul. These nations were also among the first to send humanitarian aid to the country where half the population now faces acute hunger. Most Western embassies have relocated to Doha since the Taliban took over.

However, the aid hasn’t translated into investments, even from countries the militant group views as its friends. The new Afghan rulers have failed to convince them of their ability to secure the country’s natural resources, which are estimated to be worth $1 trillion.

Beijing and Moscow have voiced concerns about the inability of the Taliban to curb terror attacks. Russia is worried about militants belonging to a local offshoot of the Islamic State militants posing a direct threat to Central Asian nations. China is concerned about the presence of Xinjiang separatist militants in the country, known as the East Turkistan Islamic Movement.

China hoped that the withdrawal of US forces would allow it to expand its influence in the region and gain access to the country’s vast mineral resources. However, the Metallurgical Corporation of China, or MCC, has yet to make any progress in mining an already decade-long delayed copper project at Mes Aynak in Logar province.

The UN Development Programme says Afghanistan’s economy will shrink 5% in 2022 after contracting 20% last year, while the country’s per capita income is projected to decline by 30% to $360 in 2022. At the same time, the cost of essential items such as food and fuel have climbed by about 40%, it says.

Nearly 23 million people, or more than half the country’s population, face acute hunger, a 65% increase since July 2021, just before the Taliban overran the country, according to reports by the World Food Programme and aid group Mercy Corps.

Struggling to govern in global isolation, the Taliban have blamed Washington as the “biggest hurdle” in preventing countries from recognizing its government, its spokesman Zabihullah Mujahed said at a press conference in June when asked about his government’s lack of recognition. The group has repeated often that it wants good bilateral relations with the US.

However, the American permanent representative to the UN, Stephen Douglas Bunch, said earlier this month that legitimacy is conditional on the group altering its policies to allow women and girls back to work and education.

Soon after he made those comments to the UN, the Taliban further isolated women from public life by prohibiting them from public parks and gyms, reversing an earlier policy that had separated men and women. It also publicly flogged 14 people, including three women, on charges ranging from adultery to robbery last week in Logar province.

“The US and the West had made clear that they would not be recognizing the Taliban regime until and unless the Taliban moderated on human and women’s rights concerns,” said Afzal. “It is precisely because the Taliban have failed to live up to these conditions over the last year that the regime is diplomatically isolated.”

--With assistance from Reinie Booysen and Elaine He.