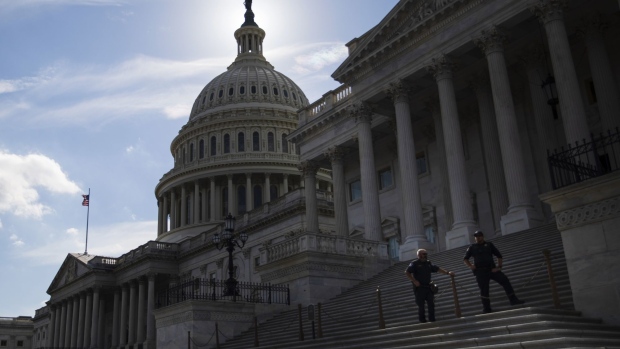 U.S. Capitol Police Officers stand guard on the Senate plaza steps on Capitol Hill in Washington, D.C., U.S., on Monday, Oct. 25, 2021. President Biden and congressional Democrats are racing to reach an agreement on a scaled-back version of an economic agenda, with a self-imposed deadline and his departure later this week for summits in Europe intensifying pressure on negotiations. Photographer: Tom Brenner/Bloomberg , Bloomberg

(Bloomberg) -- Tax credits for electric vehicles remain in the emerging Democratic spending package, breaks for renewable energy could be expanded and the fate of a fee on methane is still under discussion, Senate Democrats said Monday after a closed-door meeting on climate provisions.

Talks on measures to stem global warming in President Joe Biden’s multi-trillion-dollar budget plan are accelerating as Democrats race to finalize something tangible for Biden to present when he heads to the United Nations climate summit that begins Sunday in Glasgow, Scotland.

A major priority for the White Houses, an expansion of a tax credit for electric vehicles, remains in the bill, though discussion about the details of it are continuing, Senator Gary Peters, a Michigan Democrat, said as he emerged from the session in the Capitol with Majority Leader Chuck Schumer, Joe Manchin, a West Virginia Democrat, and other senators.

Democrats have proposed various tweaks to the $7,500 credit, including increasing its value for autos made by unionized plants and using American-made parts.

A tax credit for hydrogen was also discussed at the meeting, Peters said. Energy companies and others are increasingly looking at hydrogen as a possible carbon-free fuel, for cars, trucks and ships as well as heating buildings. The cost of producing it, however, remains a barrier.

“My hope is it’s going to be in. We’ve negotiated a methane fee,” Carper, who chairs the Senate Environment and Public Works Committee, told reporters. “We’ve tried to do it in a way that Senator Manchin as his folks will be more receptive of it. We’re still talking. We’ll continue to talk tomorrow.”

Democrats in the House have proposed a $1,500-a-ton fee on methane, which is emitted by drillers and others in the oil and gas industry, but it’s come under fire from groups such as the American Petroleum Institute, the Chamber of Commerce, and other groups who argue it would cripple an entire industry and affect thousands of workers.

Asked if he would support such a fee, Manchin, a swing vote in the talks who in the past has voiced support for regulating the pollutant, didn’t respond.

Manchin, Peters said, “was very open to the discussion. It was a very fruitful discussion.”

Hundreds of billions of dollars in tax breaks for wind, solar and other renewable energy sources could be increased after a $150 billion program to spur utilities to use more clean energy fell under opposition from Manchin, said Senator Ron Wyden, an Oregon Democrat who leads the Senate’s tax writing committee.

Among the options being considered were doing more for a proposed tax credit for energy storage and transmission projects, Wyden told reporters Monday.

“The committee’s are looking at ways we can step up,” Wyden told reporters. “I think we can do even more. We want the president to go to Glasgow with a strong a position in terms of major climate change.”