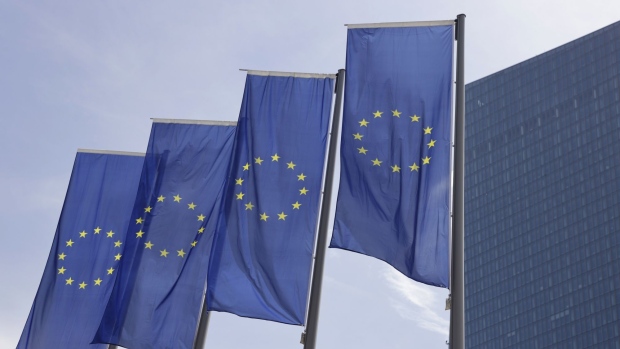 Flags of the European Union (EU) outside the headquarters of the European Central Bank (ECB) in Frankfurt, Germany, on Monday, May 23, 2022. While ECB policy makers have increasingly coalesced around the prospect of a first hike at their July 21 meeting in recent weeks, they have barely mentioned the possibility of a more aggressive half-point move such as the US Federal Reserve delivered this month. Photographer: Alex Kraus/Bloomberg , Bloomberg

(Bloomberg) -- Growing ranks of issuers are ditching bond sale plans as global markets take a turn for the worse amid an increasingly bleak outlook for the world’s economy.

German private equity firm Mutares SE & Co KGaA halted a sale of euro bonds on Wednesday, citing “present capital market conditions,” it said in a statement. It’s the fourth company to abandon a bond sale this week after a trio of issuers opted to pull the plug on offerings on Monday.

Firms are stepping back from the market amid uncertainty about the outlook for a global economic recovery. The US economy shrank at a 1.6% annual rate in the first quarter, more than economists expected, while in Europe the European Central Bank is preparing its first interest rate increases in more than a decade as high inflation hits consumers.

Mutares had first mooted plans to issue a bond on June 7, with proceeds from the sale intended to help repay some of its existing bonds, finance acquisitions and for general corporate purposes, it said in a regulatory filing that day. Its decision to halt the sale follows the same call earlier in the week from London-based financial services firm Close Brothers Group, French agency Sagess and Czech railway operator Ceske Drahy AS.

Close Brothers didn’t provide a reason for halting its deal. In an emailed reply to questions from Bloomberg News, a representative for Sagess, which oversees France’s strategic oil reserves, said markets are “more complicated than anticipated this week and following the change in market tone many other issuers are remaining on the sideline.”

Sagess said it is confident of coming back to the market later this year. Mutares, in its statement, also said it planned to return to the market in due course “if the capital market environment is deemed stable.” The company has also halted a planned IPO in Finland.

More firms may take the same step and hit pause on doing debt deals for now.

Ubisoft Entertainment SA, which hired banks for a sale of euro bonds that had been expected to come to market this week, on Wednesday withdrew a planned tender offer for notes maturing in 2023 given “current market conditions.” While it didn’t explicitly make reference to its new bond deal, it had earlier said the new bonds would help to partly refinance its tender offer.

A Ubisoft representative said in an email that the company “will continue to monitor the market to assess the conditions for such opportunity.” The company makes video games, including the “Assassin’s Creed” series.

Measures of corporate credit risk have surged this week amid a decline in global stocks, with a gauge tracking high-grade firms’ cost of default reaching the highest since March 2020. Average euro-denominated, high-grade borrowing costs have reached 201 basis points and more than double where they started the year.