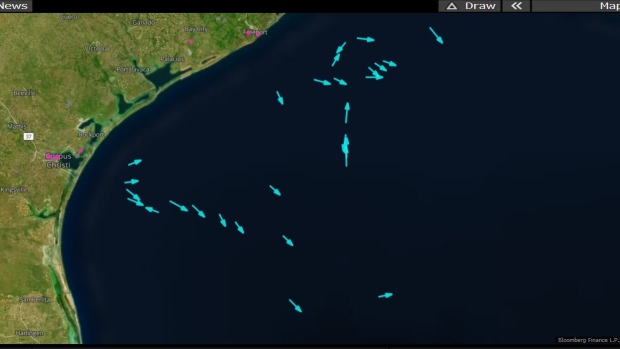 Tankers cluster in areas away of its trackships leaving aeas to cluster i , via Bloomberg

(Bloomberg) -- At least 10 vessels set to load crude from Texas ports appeared to be fleeing deeper into the Gulf of Mexico with their storage tanks empty as Tropical Storm Nicholas neared, ship tracking data compiled by Bloomberg show.

These vessels, with the capacity to haul over 8 million barrels of crude, will likely wait out the storm before returning to load. Transfers of crude cargoes to larger vessels that typically occur off the Port of Corpus Christi may be delayed for one to two days, according to people familiar with the matter.

Corpus Christi is a key export hub for American crude, including the industry’s largest terminal operated by Moda Midstream, which last year handled a quarter of all U.S. Gulf Coast crude shipments to overseas markets. The company announced Monday that it had suspended tanker loadings.

Ahead of the storm, ships were putting requests to terminals in Corpus Christi seeking to bring forward their crude loadings, the people said. Nicholas is forecast to reached hurricane strength before it makes landfall in Texas, potentially adding to supply disruptions across the oil industry left behind by Hurricane Ida.