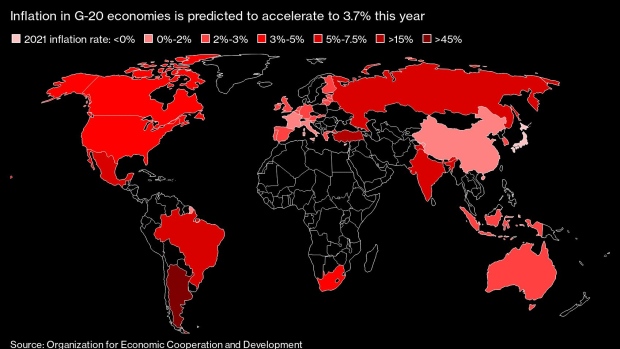 Stacks of 2017 50 subject uncut sheets of $1 dollar notes bearing the name of U.S. Treasury Secretary Steven Mnuchin sit in a machine at the U.S. Bureau of Engraving and Printing in Washington, D.C., U.S., on Wednesday, Nov. 15, 2017. A change in the Senate tax-overhaul plan that would expand a temporary income-tax break for partnerships, limited liability companies and other so-called "pass-through" businesses won the endorsement of a national small-business group today. Photographer: Andrew Harrer/Bloomberg , Bloomberg

(Bloomberg) -- Global monetary policy looks set to stay super easy well into 2022 even as central banks edge closer to dialing back their emergency support in the face of mounting inflation pressures.In the last week, the U.S. Federal Reserve signaled it will start paring its massive bond-buying as soon as November and the Bank of England hinted for the first time that it may raise interest rates this year. Norway became the first developed economy to hike and borrowing costs were also increased in Brazil, Paraguay, Hungary and Pakistan.

Behind the pivot is the sense that inflation is proving more stubborn, with the Organization for Economic Cooperation and Development raising forecasts to show consumer prices rising 3.7% in the Group of 20 in 2021 and 3.9% next year.

Supply-chains are strained for everything from semiconductors to cars, food and energy prices are surging, some labor markets are already displaying skills shortages and demand is picking up after lockdowns.At the same time, the worldwide recovery isn’t secure, complicating the task of central bankers as some even face the prospect of stagflation-lite in which inflation climbs and expansion slows amid the spread of the delta variant and with many still not vaccinated. Global manufacturers last week reported activity continues to slow.There is also a divergence. The Bank of Japan last week gave no indication of a withdrawal of stimulus, while the People’s Bank of China injected the most short-term liquidity in eight months into the financial system as embattled property giant China Evergrande Group kept markets on edge.The European Central Bank has pushed back against suggestions of a taper and one official even raised the prospect of increasing its regular asset purchases once it ends its pandemic program. Turkey bucked the global trend last week by slashing rates albeit amid pressure from its government.

And even the Fed has changed its strategy since it was last raising rates, arguing now its OK to let the U.S. economy run a little hotter than traditionally in the hope doing so pushes down unemployment and brings more into the workforce.

The upshot is while some rich nation central bankers may be preparing to tap the brakes and many emerging markets are already clamping down, ultra-loose monetary policy will continue globally for a while.JPMorgan Chase & Co. economists estimate developed market central banks will still add a net $1.5 trillion in assets to their balance sheets next year and that global rates will rise only 11 basis points over the next year to an average of 1.48%, still about 80 basis points below their pre-pandemic level.

The cumulative rise in worldwide policy rates so far remains less than previous hiking cycles -- meaning most central banks will remain supportive next year, according to analysis by economists at UBS Group AG.“Central bank policies remain on steroids,” said Jerome Jean Haegeli, chief economist at Swiss Re AG in Zurich, and previously of the International Monetary Fund.

Investors are nevertheless tuning into a change in tone amid concerns that rising prices previously dismissed as transitory now appear to have longer staying power.

According to the Fed’s preferred measure, U.S. inflation was 4.2% in the 12 months through July, well above the central bank’s 2% target. The Bank of England now expects inflation to exceed 4%, also breaching its goal. Mohamed El-Erian, the chief economic adviser at Allianz SE and a Bloomberg Opinion columnist, predicted other central banks will soon be forced to follow the Bank of England by accepting a more realistic assessment of what lies ahead for inflation.

A blow to the economic outlook could see Fed rate hikes “kicked into the long grass, with expectations moving from 2023 out to 2024 or beyond. The test for tapering is less stringent, and a start at the end of this year appears close to baked in. Even so, if the recovery stumbles the Fed might have to make a course correction, introducing discretion into a process that markets expect to run on autopilot.”

Others may soon be shifting. Mexico and Colombia are set to raise rates this week, while New Zealand and South Africa could also begin tightening before the end of the year.It’s possible that central bank officials are deliberately hosing down the inflation threat in an attempt to contain expectations. Warning of a structurally higher rate would only cement the outlook, according to Teresa Kong, a portfolio manager at Matthews International Capital Management LLC in San Francisco.

“That in and of itself could lead to higher inflation expectations, which can lead to a self-fulfilling prophecy,” she said. “The risk is that central banks will shift to tightening sooner than they’re signaling.”Whatever they do, central banks will need to tread carefully, according to James Rossiter, head of global macro strategy at TD Securities. Among the risks he identified in a recent report to clients are over-reacting to temporary inflation overshoots, delaying tightening on growth concerns until it’s too late and hiking the same moment governments restrain fiscal policy.“Central bankers are now turning their attention to removing accommodative Covid-related monetary stimulus,” he said. “While well-telegraphed, this process is unlikely to proceed as smoothly as both central banks and markets hope.”