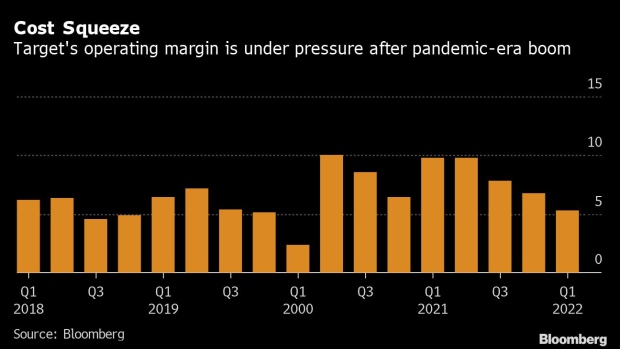 Shoppers carry Target shopping bags in front of a store in San Francisco, California, US, on Tuesday, May 10, 2022. Target Corp. is scheduled to release earnings figures on May 18. , Bloomberg

Operating profit will only amount to about 6% of sales this year, the retailer said in a statement Wednesday as it reported earnings. Target had previously predicted a level of at least 8%, in line with its long-term goals. During the three months ending in late April, adjusted earnings tumbled to $2.19 a share, trailing the lowest of 23 analyst estimates compiled by Bloomberg.

“We were less profitable than we expected to be, or intend to be over time,” Chief Executive Officer Brian Cornell said in a briefing. “Looking ahead, it’s clear that many of these cost pressures will persist in the near term.”

Target’s worsening outlook echoes the darker panorama at Walmart Inc., which cut its profit forecast on Tuesday and posted its biggest stock decline since 1987. Target said fuel and freight were $1 billion more than expected during the first quarter, while additional hits came from higher pay for warehouse employees and markdowns driven by bloated inventories.

The shares fell 12% at 6:32 a.m. ahead of regular trading in New York. Target had fallen 7% this year through Tuesday, while an S&P 500 index of consumer-discretionary stocks sank 26%.

Cornell and other executives are scheduled to discuss Target’s results on a conference call with analysts at 8 a.m. New York time.

Like Walmart, Target reported robust sales as US consumers powered ahead despite the highest inflation in four decades. Target’s comparable sales climbed 3.3% in the first quarter, almost three times the average of analyst estimates compiled by Bloomberg. Revenue rose 4% to $25.2 billion. Wall Street had expected $24.3 billion.

But strong demand for food and beverages, beauty products and household essentials went along with “lower-than-expected sales in discretionary categories,” Target said. That’s a sign that shoppers are pulling back as they struggle to buy basic goods. Cornell said customers are buying more of Target’s store brands, a common strategy for shoppers seeking bargains.

The CEO also cited a changing product mix as the Covid-19 pandemic abates. Customers who bought television sets or kitchen appliances last year might be purchasing restaurant gift cards or luggage for upcoming trips this year, he said.

The value of Target’s inventory surged 8.5% from the previous quarter and 43% from a year earlier. Retailers generally try to avoid piling up inventory because it can incur costs. Target said inventory impairments were a factor in the company’s lower-than-expected profitability.

“Unexpectedly high costs” are another challenge, Target said. During the current quarter, operating margins will be similar to the first-quarter result of 5.3%, according to the Minneapolis-based company. Analysts had been expecting 9.5%.

Cornell and Chief Financial Officer Michael Fiddelke reiterated their confidence in Target’s long-term financial future, even as they lowered expectations for this year. Fiddelke said the company has been raising some prices, although it’s also trying to avoid turning off customers with big increases.

“We have seen prices rise, but it is the last lever we pull,” he said. “You’ll see us continue to use all the levers.”