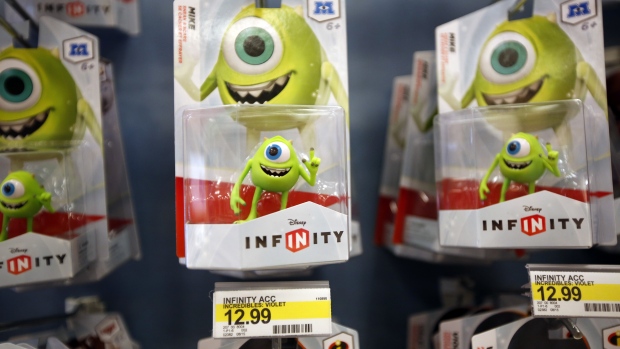 Target Corp. (TGT:UN) will create a dedicated section for Walt Disney Co. products inside some of its stores just in time for the holidays, looking to boost sales of everything from dolls to lightsabers.

The discount retailer will open Disney-themed sections in 25 stores in early October, with another 40 coming within the next year, the companies said in a statement Sunday. Target will also build a new store in the Orlando, Florida, area in 2021, next to an entrance to Walt Disney World. The 750-square-foot Disney mini-stores will sell more than 450 items from Disney-owned franchises such as “Star Wars,” “Frozen” and Marvel, including more than 100 products that were previously only available at Disney’s retail locations including its own chain of about 300 stores, which are mostly inside malls.

“I can’t think of a better national brand partner than Disney,” Target Chief Executive Officer Brian Cornell said on a call with reporters. “We’ve been working for years on how to enhance our relationship.”

The partnership could give holiday shoppers an additional reason to come to Target’s stores and website, helping it maintain momentum after several quarters of strong sales pushed its shares to a record high. Target has been one of the biggest beneficiaries of the demise of Toys ‘R’ Us, and Cornell has said that there’s $100 billion in sales up for grabs from floundering retailers like Sears Holding Corp. and Gymboree Group. The pact is Target’s second with a big national brand in recent months, following its move to offer Levi Strauss & Co. apparel in some of its stores.

Target and Disney have a long history of collaboration, which is not surprising given their brands’ kid-friendly appeal. Last year they partnered on exclusive Mickey Mouse-themed products to commemorate the 90th birthday of the cartoon mouse. Earlier they offered special in-store events like “Princess Week” and exclusive product lines that tied in with Disney’s sprawling roster of properties, which include “Toy Story” and “Iron Man.” The latest partnership will commence just in time to hawk merchandise from Disney’s “Frozen” sequel and the next installment from the “Star Wars” movie franchise.

Disney’s six-year-old partnership to sell its products in special sections of J.C. Penney Co. department stores has been successful and won’t end as a result of the Target alliance, Bob Chapek, chairman of Disney’s parks and products, said on the call. Even so, Target’s small Disney stores will feature “Disney Store” branding that J.C. Penney lacks and be more “experiential,” he said.