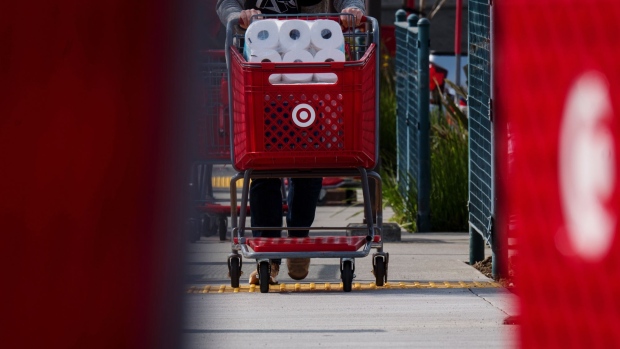 Target Corp. dumped the full-year sales and profit forecast it gave just three weeks ago even as sales in March have soared, underscoring the difficulty retailers face in navigating the unfolding coronavirus crisis.

Citing an “unusually wide range of potential outcomes” for its first-quarter performance and US$300 million in additional costs as it scurries to keep shelves stocked, the retailer withdrew its sales, operating profit and earnings-per-share guidance for the first quarter and the full year. It also suspended share buybacks and said it will reduce the number of stores it remodels and opens this year, while giving no update on when testing for COVID-19 will begin in its parking lots.

“It’s difficult to provide guidance with any precision in this environment,” Chief Executive Officer Brian Cornell said on a call with reporters. “America is largely out of business. There’s no playbook, and we are writing the script each and every day.”

What’s clear is that Target’s sales have risen dramatically as Americans stockpile everything from toilet paper to tequila, pushing sales of household essentials and food and beverages up more than 50% in March so far, Target said Wednesday. But demand for apparel has simultaneously plunged, leaving overall comparable sales, a closely watched retail metric, up more than 20 per cent for the month. Since clothing is more profitable than food, Target said its profit margins could narrow in the quarter ending April 30.

“In-store shopping behavior is unprecedented,” said Cornell, adding that the company is installing checkout lane markers to maintain 6 feet of distance between shoppers, and will now clean checkouts after every transaction. Kroger Co., the supermarket chain, has gone even further, adding plexiglass partitions at cash registers.

Target will also stop accepting returns, and stop packing items in reusable bags for fear of transmitting the virus. Shoppers who bring their own reusable shopping bags will have to bag their own goods.

Analysts have noted that Target, along with fellow discounters Walmart Inc., Costco Wholesale Corp. and Dollar General Corp., could benefit in the short term as shoppers adjust their buying patterns, keep a close eye on their spending and trade down from, say, steak to chicken.

“Consumers are reacting very quickly to the change in economic conditions, even when it comes to purchasing consumables,” Scott Mushkin of R5 Capital said in a research note. “The swiftness of this is somewhat surprising to us and may reflect that more economic hardship is already taking place than is widely understood.”

Target fell as much as 3.9 per cent in New York trading Wednesday while the S&P 500 Index gained. The stock has declined more than 20 per cent this year.

Meanwhile, Cornell declined to say whether he agreed with President Donald Trump’s desire to reopen the U.S. economy by Easter, saying “I will leave that to the experts.”

He also could not say when Target will start offering testing for Covid-19, the disease caused by the coronavirus, in store parking lots, saying only that it was in the early stages. Rival Walmart, in conjunction with Walgreens Boots Alliance, has already opened a few testing sites in the Chicago area. Target’s pharmacies are operated by CVS Health Corp., and Cornell said CVS is “providing the technical expertise” and would work directly with health officials.

As for the well-chronicled shortages of toilet paper, Cornell said manufacturers are adding production shifts to meet the unprecedented demand, which retail supply-chain experts have equated to Thanksgiving and Christmas happening every day for weeks, with none of the usual lead times to stock up.

Cornell said demand has come in waves for different types of products, starting with everyday cleaning products and then shifting to food and beverages and now items like games, crafts and small kitchen appliances.

The volatile environment has left retailers in the dark, prompting Moody’s Investors Service to cut its outlook on the entire sector.

“The U.S. retail industry is battening down for an unprecedented mix of woes,” the credit-ratings company said in a report on Tuesday.